Weirside are a club that has done well to survive as it has had the silver spoon wrenched from its mouth. As Lensbury it use to enjoy the patronage of Shell and the wonderful facilities at Teddington but when it lost that the club buckled down and have made it work renting pitches at Imber Court, Hampton Court. They are expensive but nice. It was a lovely day and a good game for the neutral.  The result of the game hung as ever on missed chances and refereeing decisions. We dominated the first half and created good openings and had several great shouts for penalties and just when I was wondering what it would take for the ref to give a penalty Weirside attacked and I found out. We had to commit the foul. It was a penalty and Arturs saved it but they smacked home the rebound. So 1 down at half time against the overall run of play.  I am afraid the second half carried on a bit like that although Weirside created a few more chances but were as profligate as us. The feeling grew during the game that it was not our day and it certainly was not.  We worked hard Weasel (David Graves, Rat’s brother) showed well and another new signing Will Kearns worked his socks off. But it ended up with the single goal defeat. 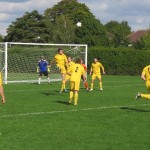 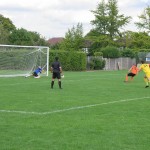