A disappointing 5-2 loss for the 1’s this week, who again had to shuffle the line-up due to unavailability and suspensions.

After the initial jostling, the opposition opened the scoring from a counter attack 10 minutes into the first half. Poor midfield tracking and static defending allowed their winger to find himself with just Angus to beat, and calmly slotted home to give Winchmore Hill an early lead.

A controversial free-kick then doubled the visitors lead just 5 minutes later.  Whilst Angus was setting his wall, their striker hit the ball early into the open goal from 25 yards out. Despite Merton’s prolonged protests the goal was allowed to stand, and a somewhat embarrassed Winchmore Hill striker trotted back to the halfway line for the re-start.

The terrible decision rallied Merton, with the lads coming close to immediately pulling one back when Bosher was denied by the fingertips of the W.H. keeper following some smart build up play and a defence splitting pass. Both sides continued to battle evenly for the next 20 minutes, creating half-chances along the way. Tommy Rowe contained and continued to kick their left winger, comfortably the best player on the pitch. Ackers battled and held onto the ball up top, whilst at the back Rat marshalled many a long ball, with Will Low putting in a reassuringly solid shift at left back.

With Merton looking most likely to score the next goal, a lack of concentration when defending a corner allowed two free Winchmore hill players to combine, the latter deflecting the ball past Angus from close range. Merton were 3-0 down and facing an uphill battle when the Ref, clearly hoping to rectifying his earlier mistake, continued his bad form when giving Merton a lifeline just before half time. Despite Bosh’s shot quite visibly (and audibly!) striking the centre half square in the face, the Ref awarded Merton a penalty, which Acker’s proceeded to calmly slot home. A buoyed Merton went into the break 3-1 down.

The battle continued after the break with Merton edging closer to a comeback. The opposing keeper was never truly tested however, and with 25 minutes to go another free kick from the visitors proved Merton’s downfall. This time, the flight of a cross-come-shot from the left touchline deceived everyone including the keeper, sailing into the top corner to restore the visitors 3 goal advantage.

This was short-lived, as good work from Vanny and (a recently introduced) Femi down the right led to Merton’s second, with Femi’s cross met by Dan Whiteman whose bullet header disappeared into the top corner. Merton rallied further and continued to push forward in numbers with the lads feeling a result could be attained. Despite a few half chances no goal came, but the over-commitment allowed Winchmore Hill one further chance on the break and they proceeded to put the game firmly to bed with 5 minutes to go. 5-2.

The result, a second disappointing losses on the bounce. With a massive cup final this coming weekend the lads will need not need any more motivation to get back to winning ways. 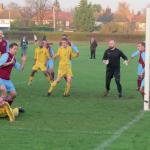