Pedro, Alex, Will and Charlie prepare to make their Merton debuts for the 1s away at EBOG last Saturday. Confident. Question: is Ivan Gladkow stretching or taking a piss in the background? Bloody photo bomber!!! 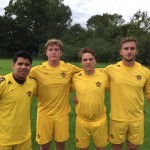 Meet Merton’s dead lion day signings from the US: Alex and Will donned their cleats and delivered strong performances at de-fensive centre and wide offence wearing the famous yellow jersey for the 1s away at EBOG ‪#‎franchiseenhancement‬ ‪#‎deadlionday‬ ‪#‎ripcecil 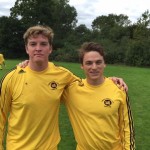 All teams except 2s play next weekend, please come down to the home ground and show your support where the 1s host Old Parkonians kicking off at 3pm and the 6s host Old Wilsonians 9s in the Junior Noverts Cup kiccking off at 1pm.  Full fixtures can be seen on home page.

The last pre-season friendly was upon us before the trip to Chiswick next weekend for our opening day fixture against Polytechnic. This meant one last chance to rectify any mistakes identified over the last few weeks. On paper, coming up against a reserve side was a little daunting however exciting at the same time. We knew that the visitors would be able to get the best out of us.

The squad was made up of those that are likely to represent the 4s for the upcoming season. Most of whom stepped up from the 5s from last season. We welcomed back Joe and Dom Plumridge after a season out and Ryan Burchell made a well-deserved step up from the 6s. Sam Ripley was between the sticks.

The opposition started brightly however it was short lived. The confidence that shone through each and every player in a yellow shirt was a blessing. There were no long ‘Hollywood’ balls, no panicking, just easy flowing football that I have not witness in a long time. Our style of play was rewarded with a goal from Dulanie 10 minutes in and a solid defensive display allowed us to go into the break with that score line intact.

Changes were made at the break with Chris dropping to partner Glen at centre half with Joe pushing up to midfield. Jack replaced Aaron and came on to play on the left flank. We way the second half panned out, these changes were a mistake on my behalf. Never change a back line unless you really need to!

Regardless of the changes, we started how we left of, dominating possession. This possession allowed us to double our advantage through Dom. The only thing that Old Salesians could resort to was the long ball however it payed off due to the high back line. They halved the deficit not long after our second and found an equaliser ten minutes later with an audacious effort having caught Sam off his line. Conceding in the manner we did had an effect on us, passes we starting to go astray and frustration was starting to show. We were now on the back foot and found ourselves behind with ten minutes to go.

With the ‘Never Say Die’ attitude that we have always played with, we were piling the pressure on and managed to find the equaliser with a couple of minutes to spare, Dom poking home into the bottom left.

If we take this performance into the season and keep the consistency then I see no reason why we can’t challenge for silverware. All we need is belief and to do it ‘The Merton Way’ and it will be a very successful season! FINAL SCORE: 3 – 3 MOTM: N/A