Second round of the cup. We came down to the hood at 9;45
Prepared and ready for the match ahead .we put our boots and stepped onto the pitch it was focus time. After our warm up and we exchanged the cards we were ready to kick off. For the first few minutes we played ok.
The oppo strikes and jack (left back) believed to had cleared it off the line we was all excited then the lino gave it as a goal to the oppo. 1 nil down. Then Theo said something and was put in the book for descent. Yellow card. The opposition striker had lots of pace wiggled through our team with pace and pure interplay to score three more goals
4 nil down by the 40th miniute we had to fix up. Then in the last 20 marcus scored, evan scored and nikoy scored from unbelievable strikes it was 4:3 the comeback was on nikoy (center back)really urged his defence to push right up we kept the ball well in there half as we fought for an equaliser but we couldnt get it. The match ended 4:3 to the oppo unlucky result from the boys
Match report by Keiron Nedd (wing)

Beacon Hill Juniors 1-3 Merton FC
Round 1 of the Surrey FA Youth Cup. We met at The Hood nice and early and prepared for the long journey to Hindhead for a 10.30am kick off.
Arrived safe & sound after the hour long drive up the A3 giving us enough time to warm up and talk tactics. Beacon Hill elected to play up the slope in the first half which meant we had kick off. The pitch was smaller than we are used to so the instructions from Steve AKA Pep Guardiola was to move the ball around quickly, pass and move, 1 or 2 touch then pass. This tactic worked we took kick off moved forward with a string of about eight passes the final of which found Marcus at the corner of the eighteen yard box he gambled and struck a perfect low shot aiming for the back post, the ball skidded across the wet grass and fortunately for us their keeper misjudged the shot he thought it was going wide and didn’t try and save it but the ball hit the inside of the post and went in. for the next half an hour the game was equally matched chances by both teams. One nil to Merton at half time.
Second half started very differently, Beacon Hill now playing down the slope dominated the first 5 mins and it was obvious they wanted to win this game, they were attacking in waves, it paid off and they scored a very good goal dispite the efforts of our defenders Nikoy, Freddie, Kadeem, and new signing Alfie. Beacon Hill kept on attacking in waves but they left lots of space in the midfield which we exploited after a great tackled from jack who passed it calmly to Mckenzie who sent the attacking midfielders on their way up the pitch, Beacon Hill had six players stranded in our half after their attack and Marcus used his pace and skill to put the ball in the net. Two one Merton.
Beacon Hill didn’t learn from this kept attacking in waves enabling us to counter attack again allowing Marcus to score his third to which Beacon Hill had no reply for.. Three one Merton.
Well done boys, we should be all proud of ourselves as we didn’t know much about the team we played and we still ended up dominating. The score ended up 1-3 to Merton all of our goals we scored were by Marcus. So very proud and lets move onto the next round.
Great day, great oppo, great referee.
Big thanks to Beacon Hill for their sportsmanship and hospitality who provided each of our players with hot dogs, a chocolate bar, and drinks. We’d like to return the favour and invite them over for a Long Good Friday friendly.
Report by Marcus Anwer (Striker)
Posted in Under 13s Reports

Merton FC vs Hook Youth Reds 4-1,
The first cup game of the season! Merton FC at home vs Hook. We all met at Joseph Hood at 9:15, everyone got there nice and early, we all were ready for action! We warmed up for 45 minutes before we kicked off.

So at 10:30 the thriller started. We got off to a good start within a couple of minutes we were dominating.  At about 15 minutes in McKenzie scored a wonder goal, top bins! Roughly 2 minutes later the opponent scored with a header from a corner, very unfortunate. After Hook scored they started to apply pressure along our back 4, however they were no match for us. Later on the half time whistle was blown 1-1 at half time.

The next half kicked off, Hook started this half but straight away we were on to them. We gave them no time on the ball, as a result we scored, Keiron was the goal scorer, making it 2-1 to Merton! The ball rolled off the centre spot yet again, straight away we were applying pressure to them. We kept on attacking until we put a ball into the box where their defender got the touch and scored a own goal, unluckily for Marcus our striker as he could’ve slotted it away. The ball was kicked and the game started again. The game died down for a couple of minutes however after a few substitutes we were back into it. The ball was moving around hooks box, we took a couple of shots that were deflected but Evan slotted it home making it 4-1. After the goal Hook started to attack towards the end. About 5 minutes were left as Hook got a couple of corners, we cleared them well, except one that trickled away from our keepers hand and was cleared off the goal line from Freddy, our centre back.

That was it the full time whistle was blown a heroic victory for Merton! What a spectacular performance from our squad.

Epsom & Ewell Colts Whites U13s 3 – 1 Merton FC U13s
At last the season begins away at Epsom & Ewell. All met at Joseph Hood nice and early, but we had a few problems, Marcus (Striker)  forgot his boots, Milo (Keeper) forgot his goalie gloves, but worst of all Justin (Winger) forgot his whole kit!! Not a good start.
10am, Whistle blows, the match started. Oppo had kick off, made two passes and we managed to get the ball and keep possession, and started to move the ball around nicely and Evan played a lovely through ball which found Marcus, he had a shot on goal and the keeper made a spectacular save. It was obvious at this early stage their keeper was going to be tricky to beat. For the next 20 minutes we dominated the game, passing and moving and shooting at every opportunity, shots from Isaac, Justin, Even, Mckenzie, Keiron, Hugo and Marcus all on target and all saved by the keeper, He was outstanding! 10 minutes to go before half time and the oppo managed to get in our half for the first by running down the right wing and Daniel made a fantastic tackle which gave them a corner. A threatening corner swooped in and we didn’t manage to clear it properly, which there midfielder took a touch and BANG top corner, a good goal but against the run of play one nil down. 5 minutes left and Marcus found a space and took at shot, a good save by the keeper again but failed to keep hold of it and Isaac just had to tap it in. 1-1. Half time.
Second Half, we  had kick off and kept the ball, the oppo had changed tactics and had everyone behind the ball we found it harder and harder to attack, part of their tactic was to play long ball, over the top football which our defence had trouble dealing with. A miss placed back by our defence put our keeper under pressure there striker managed somehow to get the ball over the line 2-1 down. Now the oppo parked the bus we struggled to play our usual passing and moving game. 5 minutes from the end the oppo once again put a ball over the top and despite heroic defence from Freddie, Jack, Kadeem and Theo they managed to score another scrappy goal. 3-1 down.
Good game, pleased with the teams performance.
Report By Mckenzie Dewsbury (Skipper)
Big thanks to
Freddie’s dad for being pitch marshall.
Jacks dad for running the line.
Isaac’s mum for photos  www.samiart.co.uk  www.facebook.com/samiartis 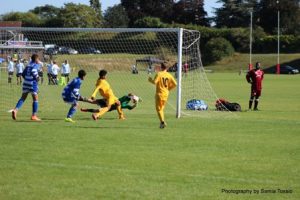 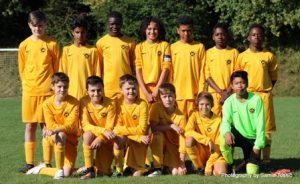