It gives me a great sense of satisfaction writing this report about the eagerly awaited Merton derby, the first competitive game between two Merton teams in many a year!

On a personal note and knowing of all the struggles in previous years, it’s great to finally see competitive Merton 6’s and 7’s getting full squads out week in week out and future is looking bright!

Anyway onto the game and the sixes were missing a few regulars in Tyron (sunning himself in Mexico), Pete and George so in came Merton legend Spense for a run out.  The sevens were pretty much unchanged from recent weeks and are starting to form a very competitive squad for themselves.

The game was played on a heavy pitch at the hood and the first 15 minutes you could tell nobody had played competitive football for a few weeks as passes went astray and touches were heavy.  It then turned out to be a very even affair with both teams coming close, firstly a great save from Gubby denied Callum for the sixes and then some neat play by the sevens opened up the defence and Malcolm missed a great chance.

The match was still a bit scrappy and as was the case with two teams who knew each others strengths and weaknesses, this was to be expected.  It was Merton 7 who seized the initiative with good work down the left and a squared ball (think it was Scott) across the box was slotted in by Dobson. 1-0 to the sevens!  Was there a shock on the cards with the Merton lower team taking the lead against there higher counterparts!  The gaffer of the 6’s was not pleased and with the half coming to an end words were exchanged within the squad, actually it was just Chris moaning, but still words were exchanged!  Half time came and a few changes were made by the sixes in a bid to freshen things up!

The sevens half time talk must of consisted of keeping things tight for the first 10 minutes, but unfortunately for them, this only lasted 1 minute as straight form the re-start the sixes equalised! Some great work from Callum saw him take a shot (which was going wide) and take a massive deflection into the bottom corner of the net and the score was 1-1!

Again the same pattern of play was similar to the first half, but the better chances were starting to fall to the sixes.  Dan P was particularly guilty of missing a sitter!

As the half wore on the sevens looked slightly more tired and with the extra sub on the sixes side this began to tell.  A few players from sevens began to pick up knocks with Dan and Billy in particular limping around, it was then when the sixes struck again.  After the ref finally found his whistle, a freekick was awarded to the sixes and with presence of mind a quick freekick from Chappell released George who broke free and squared the ball for Trey to neatly slot the ball in the net. 2-1 sixes!

As the game was entering the latter stages the sixes had further chances to put the game to bed, but whilst it remained tight the sevens were always in the game and towards the end caused numerous problems for the sixes defence.  Scott was causing problems with his runs and Adam on the wing was seeing some joy.  Swanny made a great save to keep it 2-1 and with the final kick of the game Dobson volleyed wide from close range.

After the game much banter was delivered from the sixes, but they knew they were in a game and in fairness the real winner was Merton Football Club.  I personally found it difficult playing against mates on the oppo and others may have done as well as both teams weren’t at their best.

I would like to mention that Ram apparently nutmegged someone three times, but I didn’t see it so it doesn’t count.

Also for a change the sixes skipper is writing a report without scoring or finding an assist.

Now for Man of the Match, and as no votes were cast, I will give it to the following:

Sixes: I am going to give it Paul, battled hard and produced that bit extra to make the difference.

Sevens:  A choice between Gubby and Adam, however I will give it to Gubby for keeping the sevens always in the game.

Dick of the Day Sixes: Nominations were for Chris for playing in a very very attacking midfield role and too much moaning ;o) and Dan P for a missing a sitter. But as they need to be dished about fairly, it goes to Swanny for two reasons a) for being late and b) the reason for being late was he was attending a hospital appointment to arrange an operation for his bad back (I am sure they didn’t recommend playing football after that diagnosis!)

Dick of the Day Sevens: Not my place to say, but just for Malcolm’s miss let’s say him. 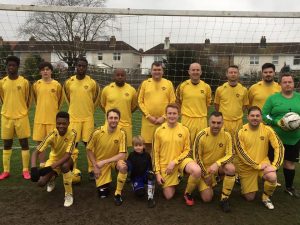