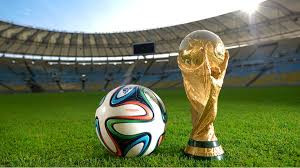 Don’t fancy a trip to Russia or Doha in the next six years? The good news is that this year, the World Cup is coming to you. That’s right folks, Merton FC is staging its inaugural 5/6-a-side World Cup on Saturday 13th May at the Hood (assuming all league games are
done by then – we may have to do it a week later!!!!!).
Our plans at this stage are provisional depending on numbers, but
the aim is to organise 8 senior teams, with squads of roughly 8 players each. Ideally, we will have seven pots, each containing names from the respective seven senior teams at the Club. We will then draw one name from each pot to compile each team, so that there is a good mix of strength from across the club. Goalkeepers will be kept separate and added in thereafter to make up the eighth member of the squad.
The draw, should the enthusiasm warrant it, will be done on Facebook Live closer to the time, thus making for an enjoyable spectacle. We will then separate the 8 teams into two pools of four, with the four teams in each section playing against each other in a round robin (ie: 3 matches). We will then have semi finals and a final, along with a plate section for those who don’t make the playoffs.
Games will be 20 minutes’ long, with three pitches marked out. That means there will be some opportunity for rest every third game as well. We’ll also mark out a fourth pitch for the Youth section, so that they can stage a similar tournament. Would be great if we could include parents or coaches
in their event as well – the more people we can get involved, the better.
We will decide if it is 5 or 6-a-side closer to the time, depending on numbers. Start time will likely be in the region of 1pm. Price is also TBC, although we will aim to keep it to £10 each, including food.
The aim is to make this a family-friendly occasion, with a barbecue afterwards (a big thank you to Darren Avey, who has kindly offered/been roped in to cook us burgers and sausages) and also
other amenities like jumping castles and what not. There will also be Premier League football on too, which will be televised at the bar.
We’ll be doing this properly too, with a trophy and prize giving. A pretty exciting concept, and could hopefully commence a fine new Merton tradition. The idea is in its embryonic phase at this
stage, so all suggestions are welcome. We may even listen to them. Either way, it should be a wonderful day out for all of us.
ALL WE NEED FROM YOU AT THIS STAGE IS TO CONFIRM WHETHER YOU ARE KEEN TO PLAY!!!!