Brilliant sunshine greeted Merton as they stepped onto the pitch after a relatively short trip down the A3 to Esher to face Claygate Royals. The opening exchanges showed that the teams were evenly matched; gradually Merton started to dominate possession and more importantly turn that possession into clear-cut chances. After sixteen minutes, Faris went close with a shot that Claygate’s keeper just about managed tip over the bar. From the resulting corner, Rio hit the bar and then Claygate scrambled the ball clear.

Even though Merton were creating the majority of chances Claygate looked good on the counterattack and capable of scoring. Against the run of play they did just that, after a long goal kick and a big bounce Claygate’s striker was bearing down on Merton’s goal and managed to strike the ball low into the bottom right corner.

Coach Neal made changes and on came Louis, Maxwell and Percy.

With his first touch of the ball Maxwell started on a run that took him to the right side of the Claygate penalty area. He then let fly with a fierce shot into the bottom left hand corner of Claygate’s goal. Claygate’s keeper dived the right way but could do nothing to stop it.

The game remained incredibly open, no buses were parked and no-one was shutting up shop. The referee, who was very good at letting the game flow, eventually blew the whistle for half time.

The second half started the way the first had finished with good levels of energy and enthusiasm from both sides. Merton were slightly edging it in terms of possession but still needed good defensive work from Harry, Joe, Ollie and Max to keep the scores level.

Merton’s midfield trio of Dave, Percy and Louis were doing particularly well and ten minutes into the second half Percy crossed from the left wing towards Louis. In a desperate attempt to prevent Louis getting to the ball the Claygate defender put the ball into

1-2 Merton lead for the first time.

Claygate mounted more attacks in an attempt to get back into the game, Merton responded with their own attacks. As players tired, some of the composure of the earlier exchanges was lost. This was a fair battle that could have ended 10-all.

After 18 minutes, Maxwell managed to control a bouncing ball in the centre circle and set off toward the Claygate goal. Just outside the penalty area, he struck a powerful shot that went in to the centre of the goal just below the crossbar.

More waves of attacks from Claygate, more hearts in mouth moments for both sets of parents. With only minutes left to play, a long shot from Claygate is brilliantly saved by Max, only for Claygate to be first to the loose ball and slot home.

Unbelievably both sides continued to create chances right up to the final whistle. In truth, either side could have won it but Merton managed to hang on to their lead and their 100% 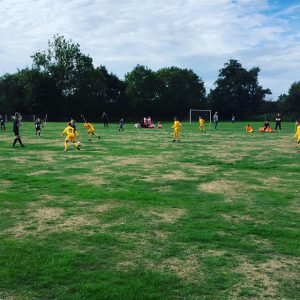 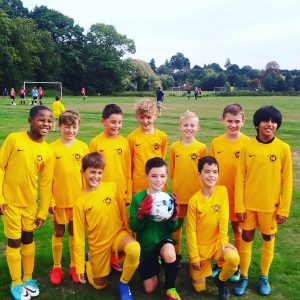 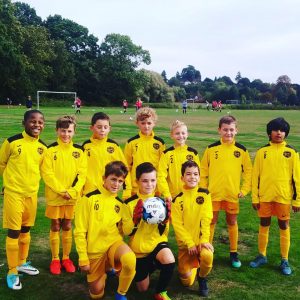