It was Merton’s third home match of the season and most of the parents in attendance were glad that that the early morning rain had stopped. The conditions were pretty ideal for football and so it proved. Kicking down the slope from right to left Merton started brightly. Inside 3 minutes, Percy passed to Maxwell and then Maxwell found Louis with a pass to the right. The pair of them were advancing towards the Mitcham goal. Louis returned the ball to Maxwell. Maxwell passed to Louis again and Louis returned it to Maxwell. Maxwell struck a powerful shot to the bottom left hand corner of the Mitcham goal. It went in! Three minutes on the clock.

One nil to Merton

Merton’s early goal and great start to the game led to a period of dominance; dominance of possession, of thought and action. Merton were quicker to the ball and their desire was stronger. They created so many chances. After 7 minutes, Dave, who was being productive on the left, whipped in a cross that Louis headed onto Mitcham’s back post.

Further chances were created by Merton, Dave had four separate attempts on goal after good approach work on the left. There was only one word for what Mitcham Park were facing – onslaught.  Merton should have converted more of their chances. At this stage, if it had been a boxing match Mitcham’s Corner Man would have thrown the towel in.

Mitcham Park were only able to make occasional forays into the Merton penalty area and when they did Max was equal to the task. However, Mitcham Park were still in the game because the score remained at 1 nil.

With 17 minutes gone, Faris made an excellent diagonal pass between the Mitcham centre pack and left back for Rio to run onto. It was perhaps the pass of the game. Rio met the ball full on but his first-time shot blazed over the bar. Was this to be one of those games when Merton would rue their missed chances?

Twenty minutes gone, good work from Joe; he wins a tackle, cuts inside and threads a lovely ball to Faris. Faris is heading towards goal and shoots but his shot is blocked.

The referee, who had been very good at letting the game flow, blew for half-time. Amazingly it was still only one nil to Merton.

The stand in coaching partnership of Stu and Roy encouraged Merton to keep Mitcham under pressure as the second half commenced. Merton renewed their onslaught and created more chances. Merton were now kicking up the slope from left to right. Good work from Faris and a cross to the back post. Joe met it well but his shot went just over the bar.

Ten minutes into the second half, the ball breaks to Rio outside of the Mitcham penalty area. He controls the ball and shoots to the top middle of the goal. It’s a great shot and goes in above the outstretched arms of the Mitcham keeper.

The second goal produced two different reactions from the teams. Merton relaxed a little feeling that the game was over whereas Mitcham Park upped their intensity and desire. Mitcham wanted to give a better account of themselves. Merton still had most of the possession but Mitcham were looking more dangerous on the counterattack.

This was the best period of the game for Mitcham. After good approach work Mitcham’s striker had a good shot on goal. Max saved it and appeared to have the ball in both hands. The Mitcham striker tackled Max, the ball was spilled and then bundled into the goal by Mitcham.

Two – one to Merton.

The parents of the Mitcham players were now in full voice, spurring on their boys. A comfortable game was becoming less comfortable for Merton. Some of Merton’s goal mouth drama was of their own making but Mitcham were now putting them under pressure.  There was some resolute defending by Harry, Joe, Ollie and Max but Mitcham were not to be denied. A shot from inside Merton’s penalty area to the bottom right of the goal proved successful. It went in!

Wow! How did we get to this point? In the first half it was Easy Like Sunday Morning for Merton but if Merton were to win now they would need to go back up the gears and create a grandstand finish. With only 6 minutes left to play, they were able to do just that. Urged on by watching parents Merton increased their intensity, Maxwell created some space and let fly with a powerful shot to the bottom left of the goal. The Mitcham keeper got a hand to it. The ball was spinning agonisingly over the line. Was it completely over the line? Would the keeper recover his position and clear it? Dave slid in to make sure and poke the ball completely over the line.  A Video Assistant Referee (VAR) would have cleared up who scored but it may be a while before VAR is introduced at Joseph Hood Rec, the important point to remember is that it was a Merton goal!

This was a great response from Merton and they were well worth their lead. Within 1 minute of the re-start, the ball broke to Louis who fired in a powerful shot that Mitcham’s keeper was unable to save. The ball went into the centre of the goal!

Two quick-fire goals in 2 minutes put the result beyond doubt. The last few minutes were relatively uneventful and then the referee blew the full-time whistle.

Joe was awarded Man of the Match. 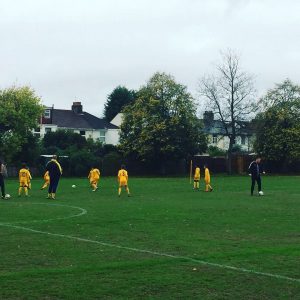 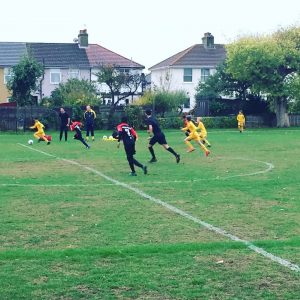