This week saw us host arch rivals Croygas at The Hood.  There was a slight frost to the ground which soon thawed out with the November sun coming down. The Pitch wasn’t too bad as it had been worked on by the grounds man to help with the drainage.  Now before the match, Taff had wandered off, returning from the showers just before kickoff.  Apparently his dog had decided to have a roll around in another dog’s doo doos.

This week was refereed excellently by Elz, who controlled the match throughout. Allowing play to go on when required and speaking to and encouraging the both set of players during the game. This week’s line up was Max (GK), Harry (T.Adams again) and Archie (defence), Louie, Percy and David (Midfield) Faris (up top).  Subs were Ollie, Joe and Lewis, tactical by the coach as some of the Croygas players knew their playing styles.  We kicked off with the sun in our eyes. A cap is what Max required as the sun obscured his vision. Again this week we started strong and played like we did against Kingstonian.  Link up play was good between Faris and the wingers. Chances were being made but again not converting.  Joe catching one shot to well for it to just clip top of the cross bar. The opposition had some strong players who also had a few chances.  The opening goal was scored by them.  Corner taken, came into the box and was flicked in by one of their players.   Not letting their heads drop they kicked off and continued to press.  Changes made half way through the half, Ollie, Lewis and Joe on for David, Archie and Louie.  We levelled scoring from a corner as well.  The ball crossed in by Lewis, which was met by Ollie on the half volley and placed into the net.  Half time came and it was a well even match so far.  Again we wondered where Taff was as it had been quiet on the side line, he was mingling with the oppo parents further down the touchline.

Second half began and a quick reminder to Stuart who was bit confused (but not hung over)during first half cheering on the blues (his Saturday side colours) and shouting to the ref it was the blues ball for throw ins. When clearly it was yellows ball!! For the first part of the second half Max didn’t have a lot to do.  But the last 10 minutes, wow pulling off some unbelievable saves to keep us in it.  One shot was tipped around the post and another was tipped over the crossbar.  Well deserved man of the match award at the end.  The boys all put in another shift especially Faris, Ollie Lewis and David who was still looking for his first goal for the team.  With a few minutes left Lewis broke on one of his runs, dribbling around a few players when getting fouled just outside the box, although the oppo felt the ball was won and shouldn’t have been a foul.  Free kick was given, Lewis and David stood over the ball Lewis stepped up and hit the ball on target to see it go in.  2 – 1 with a couple of minutes to go.

Final whistle blew and the match finished 2 – 1.  A game where a draw would have been a fair result but getting the win was magical.  Another win on the bounce for the team and the boys playing some great football.  The mini festival finished 2 wins and 1 lose, not too bad.

Back to the league next week with an away fixture against Bedfont Eagles Whitesox. 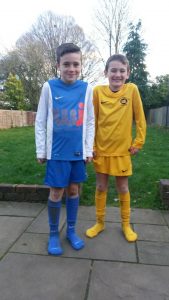 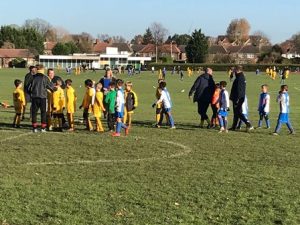