On another lovely sunny morning at the hood the under 9s arrived eager and ready for action after the half term break to face a very good and established Woking cougar colts in our first festival league match.

Woking kicked off, we gave them no time on the ball, gained possession and had the first shot on goal within a minute. The game settled and the teams proved evenly matched. First time for ages we had a full squad of 10 and rotated players regularly keeping up the tempo and pressure until we finally broke the deadlock with a goal from Sam 1-0 merton. Woking pulled back an equaliser with a very well worked goal with virtually the last kick of the half. 1-1 at the break.

2nd half we came out with 3 positional changes and started to control the game, a goal from Darius put us 2-1 up and then the final switch of the game Presley in as centre forward who put away 2 more. Final score 4-1 Merton. A fantastic team performance with every single player shining bright, a really good entertaining match.

Sams dad awarded man of the match to Presley, but again anyone of them deserved it, and his most memorable moment was the whole game.

Mention to Woking who had a 40 minute drive to play us, great team, fantastic coaches, very pleasurable day, look forward to playing them again. 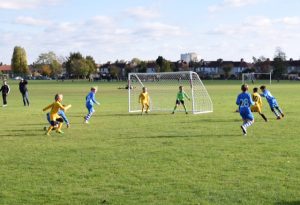 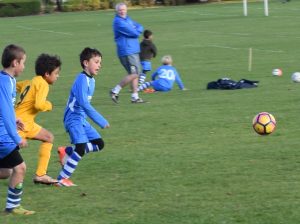 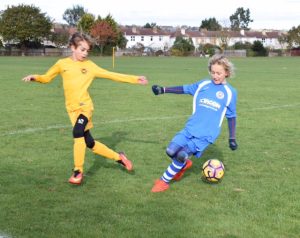