The last match report I wrote we played in the same cold (but not wet) conditions about a month ago.  Thankfully this week’s game got switched to our home ground and the pitch was playable.  The pitch actually looked in good condition, slightly frozen in places, but game was on at least. The boys (full squad) all turned up on time.  Neal telling each of the boys to keep wrapped up warm until kick off.  Again Joe braving the cold by wearing just shorts refusing to wear leggings.  Louis braving the cold by refusing to wear a coat, so much so that his dad returned home to get him one, whilst there forgot to pick himself up some gloves.  The parents, coaches and couple of siblings (with a hot water bottle) on the other hand wrapped up warm on the side line.  Although by the end of the game feet and hand couldn’t be felt by all.

Starting line up this week was Max (GK) Harry, Archie, Ollie, David, Lewis and Faris.  On the bench were Louis, Percy and Joe.  This week Neal placed a running sensor on Percy to see how much he was performing.  Pictures below with the results.  We started off slowly but passed the ball about nicely.  Unfortunately when we gave the ball away the opposition counter attacked and their centre forward taking his chances well putting Kingston Town 3 – 0 in the first half.  One of his goals was put away nicely with his head from a right by-line cross.  Few changes made by the coach .The boys continued to play some good football and linking up well.  Faris put two away to bring the score back to 3 – 2 and that is how the half finished. Quick team talk and back for the second half.  Not realising he had no shin pads on, ref ordered Percy to leave the pitch to go and put them on part way through the first half.  Not sure if the sensor picked this up or not?

The second half we put on a bit more pressure.  The opposition having the bare 7 players didn’t look like they were tiring.  The continued to get us on the counter attack but now having two at the back we defended better stopping them from scoring.  Max saving well as usual and David and Joe clearing a couple of balls off the line. We had some great play with some good through balls and wide play especially by Louis who continued to try and get crosses into the box.   Chances came and went but no outcome of a goal.  Their goalie pulling off a great save near the end to deny the leveller.  The second half saw no goals and result finished 3 -2 to Kingston Town.  Considering the cold weather and score, all the boys put in a good performance and worked hard.

Parents quickly cleared up the equipment, Taff pointing out and apologising that he had to get away sharp, this meant Stu had to put away one of the goals. I think he had a sun bed booked to top up his Goa suntan.

MOM this week was given to Louis. 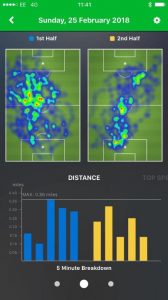 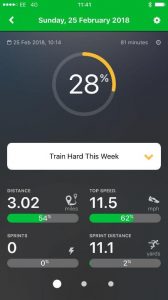 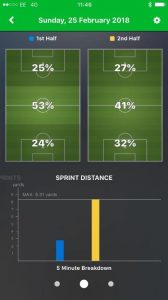