Today’s results – it was an away day at HSBC with three of our teams there. The 1s lost 4-2 after being 2-0 up in tough conditions against a strong side. (Chas 2 goals) the 3s won 4-0 (scorers Tom B hat trick and Michael Gibson Iain Evans DOTD) but Darren Fitz was off to hospital with a nasty rib injury. 4s won 5-2 ater being 2-0 down (Sonny Kennedy (MOM) 2, Dom P will Toms and Will Harrison but Joe P DOD) 5s lost 4-2 AET at South Bank Aron Byrne scored twice. Kieran Lee was MOM but Josh F-S was DOTD being sin binned in ET that always helps. 6s won their cup game at HSBC 7-3 Tony 3, Callum 2, George B and Trey. Callum with MOM and DOTD Chappell for his outburst and water bottle throwing antics at the Gaffer.(Team pic below) 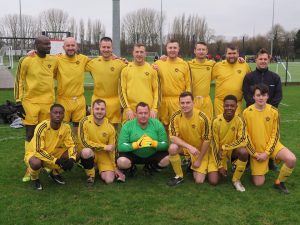