Having recorded back to back 2-1 victories the boars had high hopes of continuing their fight to avoid the drop and confidence was high against mid table opposition with nothing to play for.

The game kicked off in glorious conditions with Merton adopting the same 3-5-2 formation that had served them well in previous weeks. The boars started off ok looking to utilise the width through Sam K on the right and Glenn on the left with Fitz and Denys providing the outlet up front. The first 25 minutes where characterised by Merton having most of the ball but not quite finding the final pass or snatching at shots, things had been reasonably comfortable in the defensive third with South Bank not really threatening Sams goal.
However from the first corner of the game for the opposition the ball was swung into the back post where an unmarked player easily put them into the lead with much discussion as to who’s man it actually was.

The goal seemed to knock the boars off there stride and the opposition started to dominate the play, this lead to another corner being given away, the opposition spotted the chance to play a short corner quickly and without any challenge on the player in possession the ball was worked into the area and hammered home from 10 yards with no problem at all. The boars went in at the break 2-0 down having switched off twice and been punished as a result.

After some much needed fluids and some shouting the second half began, the boars determined to get something out of the game.
Again getting into some good advanced positions through the lively Aaron and Glenn but never finding that final touch to get the goal that would hopefully be the catalyst for a comeback. As the half wore on the game was getting more stretched with the heat starting to produce mistakes from all the players, the boars finally broke there duck for the afternoon when a cross from Sam K found the unmarked Denys near the penalty spot and he made no mistake with a low shot to the keepers bottom left corner. With ten minutes remaining one last effort was made to grab a point and although the boars pushed hard in the final few minutes the equaliser could not be found, Walshy making a swashbuckling run from left sided centre back into the oppos area and firing just wide. The match ending 2-1 to South Bank, notable performances from Sam K, Aaron and Neil but MOM went to Glenn for his all round quality display.

Only a win will do in our final match to secure our division one status for next year.

On the back of a fine win the previous week, there was a buzz in the Merton 3s pre-match change room and it wasn’t coming from the speaker. The playlist theme was ‘songs from the year you were born’ – an eclectic mix of disco bangers and tunes they used to play in the dining room of my late nan’s nursing home.  Nevertheless, there was an electricity in the air and a glow about the team. Something magical was about to happen.

The first 5 minutes of the game featured a Merton side literally still finding their feet. It appeared some genius had decided to mow the grass in between and around each of the football pitches but avoided the actual playing surface. After steadying the ship, the 3s hunger and energy soon took control of the game. A masterclass by Mustard, Walshy, and Iain in defensive discipline provided the foundations for increasingly extended periods of attack which, after a hard fought 30(ish?) minutes, rewarded the mighty Boards with a freekick just outside the opposition’s 18. Glenn steps up and the free kick is executed perfectly, whereby the ball was crossed in without much power sort of to the left of the keeper, and everybody else went to header it but then missed. 1 – nil Merton.

The closing minutes of the first half were as tough as the opening and it would have been 1 – 1 at the break if not for the flying aerobatics of Coach – Keeper Fitz. After the save, Fitz was confused and could not remember where he was or what had happened – a situation he finds himself in most Saturdays but not usually as early as 4pm.

After a 2 minute half-time of everyone talking over each other about different aspects of the game, the 3s ran into the second 45 with a renewed aggression and eyes firmly on the prize. No major changes in formation or strategy from the first half, and possession seemed to be split fairly evenly. Some rotations in the midfield made way for super-sub Luke who came on and made it 2 zip with a delicious, curling shot that I’ll be dreaming about for weeks. Aaron came on up top and made some great runs through the opposition back line – providing a crucial avenue for Merton to remain on the front foot. Actonians weren’t handing it over, picking it up a little with a goal of their own with 20(ish?) to go. However, the Boars held a good shape and kept running until the final whistle. A hard fought game, a just result, 2 on the trot.

This was the last game of the season at the Hood against Corinthian Casuals.  Normal pitch had been taken down, so had to use the nearer pitch, great for the parents as didn’t have to carry the goals so far.  The pitch had a few boggy areas from the weekend rain but was playable.  All ten boys showed up for their last game of the season.  Neal took them to one side and started the warm up.  Corinthian Casuals had the bare 7 players. Dave Laughton tiding up a largish puddle on the side line just before the game began.  10 o’clock came and the ref started the game.  Starting line-up this week was Max GK, Joe and David defence, Lewis, Louis and Percy in midfield with Archie up top.  That left, Harry, Ollie and Faris on the bench.  We started ok getting the ball out wide, passing nicely and creating chances.  Unfortunately they scored first, Joe and David going for the same player, ball was played through, which, left the tall striker through to slot the ball beyond Max and his big red gloves.  We started again this time pressing better and winning the ball. Louis got us level slotting the ball into the bottom left corner.  After this the goals started going in, David scoring from a very tight angle, again his mum missing this one, not for the first time.  Changes made half way through the half, Harry, Ollie and Faris on for David, Joe and Archie.  Harry as usual being solid at the back mopping up any balls played through and tightly marking their tall striker.  We stayed solid, Max pulling off some great saves as well as Corinthian’s keeper.  Lewis scored near the end of the half making it 3 – 1.

The boys gathered their drinks and sat to hear what Roy and Neal had to say about the half and what they should do in the second.  Few changes made, Archie, David and Joe back on for Louis, Lewis and Percy.  This half we had most of the possession, Corinthian with only 7 tired as the half went on.  Faris grabbed two goals this half keeping him top goal scorer for the season.  Joe with a poachers finish and David thundering home his brace, this time his mum saw this one.   They grabbed a late consolation goal at the end, and what a goal it was not even Max’s dad would have saved it.  A thumping free kick into the top left bins.  The ref blew the final whistle; all the boys played well and put in a great performance for their last game.  Final score 7 – 2.

Neal and Roy gathered the boys and parents into the clubhouse as they had some individual team awards to hand out.  Man of the match this week was Harry for his solid performance in defence.

That left Neal and Roy left to wrap up the season with a thank you to all the parents for their help over the season, and the boys for efforts on the pitch and at training.

All the parents and boys would like to give a big thank you to Neal and Roy for giving up their time on a Sunday and Tuesday night and running this year’s Merton under 9s.  The improvement of all players over the season has shown and they have been a pleasure to watch every Sunday (when it hasn’t been called off due to weather and pitch conditions).  Hopefully most of the boys will stay and play next year as the Merton under 10s.

The club youth awards is on 19th May at 3pm with a BBQ and the FA Cup Final being shown after, also the adults will be holding a World cup 5 a side tournament that day also.  Hope to see all the boys and parents back for this event.  Stu the bar will be OPEN!! 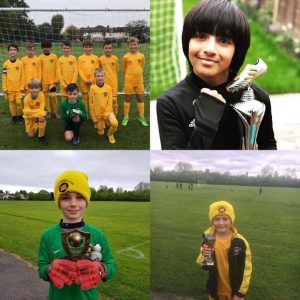 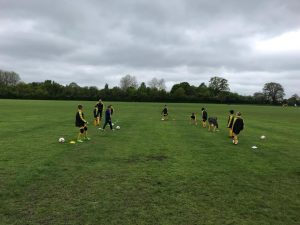 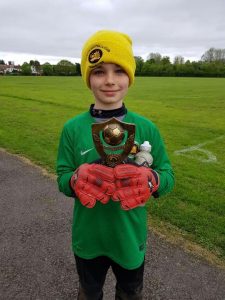 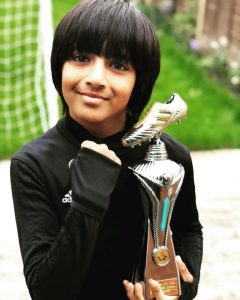