When the last of the Merton squad rolled into Ham to face bottom of the league Kew Association last Saturday it was with just thirty minutes to spare (some advice: don’t try to travel to Twickenham by train at noon on a Rugby match day). Upon arrival we were informed that we were a bare eleven with our substitute James Laughton currently playing for the 1s on the adjacent pitch. Safe to say the team picked itself.

Following a somewhat truncated warm-up the game got underway and Merton quickly were in the ascendency. Finding a fair amount of joy down the wings (with Ben Victory in particularly swashbuckling form) the Boars carved out a number of promising attacks in the first twenty minutes while Kew were seemingly happy to sit back and counter when the opportunity arose.

It was surprising therefore that Merton’s first big chance of the game came as a result of their own counter-attack when Dan Kelly was played through on the left-hand side of the area after a lovely build up move. Unfortunately his shot lacked the bend to beat the keeper who made a good save, but the signs for Merton seemed nothing but promising.

Kew rarely threatened, except for at set pieces – most notably the occasion when Alex Herbert in goal was particularly bamboozled by the flight of the ball and flapped somewhat, under pressure from the strikers closing in on him. His appeals that he had been impeded in the air were remarkably tenuous, and they rather entertainingly earned him no joy save the referee advising him to “man up”. Not sure whether that is an official method for dealing with dissent endorsed by the FA…

At the other end the breakthrough should have come just before half-time when a textbook training ground throw-in routine saw Tom Benham spurn a golden chance six feet out with the goal gaping. Unfortunately his volleyed effort soared over the bar and Merton went in at half-time level but with their tails up and a goal seemingly only a matter of time.

As it was they somewhat struggled to get going in the second half, and the game became very scrappy – lots of long balls and headers rather than Merton’s heretofore “keep it on the turf” passing game. In fact, it was a style very much suited to the hosts who visibly grew in confidence the longer the game remained goalless, and as such they started to carve out chances of their own, even hitting the bar twice.

Then after approximately an hour played, Tom Benham was played into the box and rounded the keeper only to be taken out. Never one to be denied a goal-scoring opportunity, Dan Kelly seized the advantage and attempted a shot at the open goal, only to see his effort rattle off the inside of the woodwork. In the post-match debrief in the bar, Dan would insist that the angle made it nigh on impossible, but this reporter still requires convincing. Despite this, the referee called play back and awarded Merton a penalty, much to the chagrin of the opposition who claimed the advantage had been well and truly played (and squandered). Surely now Merton would break the deadlock?

Before we get to that, some caveats: Firstly, the penalty spot was in truly an horrendous state and even to get the ball off the ground in such circumstances should be considered a feat worthy of applause. Secondly, with the cries and recriminations of the opposition ringing in the air it is understandable that a penalty taker could be wholeheartedly put-off. Thirdly, there were not exactly an abundance of volunteers to take the penalty, and responsibility was very much thrust upon the shoulders of yours truly. Despite these factors, I stepped up very confidently and with the skill and accuracy of Owen Farrell (doing the very same thing just a few miles away in Twickenham) sent the ball soaring high over the posts…0-0 it remained (and if we are being honest, justice was probably served…it was a very very very ropey advantage call by the referee).

So the game continued and Merton’s depleted squad soon suffered a few niggles, none more notable than Ben Victory who received a big whack to the knee and had to hobble off to be replaced by an already injured substitute. Ben returned to the fray five minutes later with just under ten minutes to go, visibly limping and saying a quick hail Mary. Whether it was divine intervention or not, as the ball was cleared from a corner it fell to him to start a counter attack. He then set off like a greyhound up field, seemingly free of all pain, and was able to finally bundle the ball past the dumbfounded keeper. Cue wild celebrations. It is unclear whether Ben was crying with joy or agony…

The celebrations were short-lived unfortunately, as with the last action of the game, Kew managed to find a – probably deserved – equaliser and round off a very frustrating game from Merton’s perspective.

Still, we choose to see it as an away point gained, and have the chance to finally put a few past the same opposition this weekend as we host them at the Hood.

Man of the match: Paul Pearce – captain for the day and a veritable rock at the heart of the Merton defence which performed very steadily all game

Dick of the day: Andrew Holder Ross – the fall guy, cruelly and harshly punished for his penalty miss 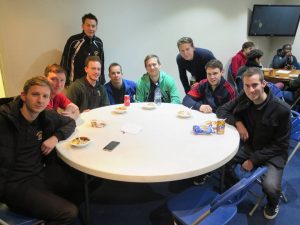 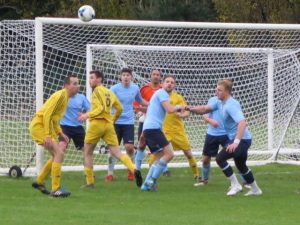 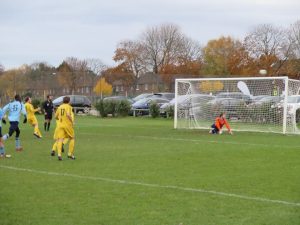 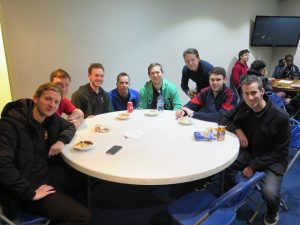