Merton 5’s may have been a little late to the race to the top of the league, but they have took to the SAL Intermediate Novets Cup like a duck to… well you know the rest. After a confident and capable display against Norseman 6’s and a hearty 4-1 win (thanks to Darren for preventing the clean-sheet…again), we were to give this game a similar gritty approach. Up against Old Parkonians 7’s, we trained like only the maestro’s do, passing the ball around in a circle and demanding a first free pass.

It’s important to add that due to a few of the missing regulars, we opened the Merton 5’s doors to three Merton regulars, Denys z, Iain E, Neal D and Akram C. Starting with Neal and Iain in the centre midfield, they demanded focus and showed a true collaborative Merton spirit.

The game started with a fighting spirit from both teams, pushing to dominate control of the midfield. Opportunities were had at both ends, with defensive forces managing the attackers cleanly. The occasional break was had for the Old Parkonian’s, but credit goes to Lee for his capable catches of the ball. At the other end, Aaron had many a good opportunity, running onto the long ball, however, the referee gave offside. We still aren’t sure whether this is correct or Aaron is a devil to the defences (probs the latter).  Furthermore, Phil (CB) had a good opportunity from a long cross from Darren, missing the goal by a margin – the keeper instead decided to sweep him out of the game, but alas, no penalty was given. The first half had all the ingredients of a draw for both teams, but credit goes to the keeper and the midfield for their dominant displays and confident handling of the ball.

The second half erupted with greater passion, both teams eager to score the first goal. The Parkonians edged closer, having some effective breaks through the middle, swamped by the central defenders to be put out for the throw-in. An effective through ball from their central midfield saw their striker collect their ball in the box, only for Lee (GK) to meet this with his own determined run, striding out confidently to block and defend the goal. A similar occasion occurred shortly after, with a powerful kick aimed at the target goal. If it wasn’t for the spines of Darren, Chris and Phil, who managed to deflect a string of shots aimed at the goal. As they say, fortune’s favours the brave, and today, Merton 5’s were brave for a favour. After a mature and well delivered cross, Aaron was on-hand to receive the cross at the back post. With a horde of defenders charging towards him, his composure was impressive. With all expecting an across the box finish, it was even more impressive to see him drill the ball low and left, with the keeper managing a weak save before the ball entered softly into the goal.

Merton had deserved this lead. They had worked consistently, as a team, and fought tooth and nail for this lead. Off went Aaron and his chase for the golden boot and on came Denys. With 15 minutes to go, the game could have gone either way. A low-drilled cross from the opposition had those on the front post unaware and the ball dribbled into the goal. Fortunately, the referee had already blown for it to be re-taken. Again, fortunes favours the brave! On the break and with minutes to play for, Merton 5’s countered down the right flank. With a well-positioned cross meeting the left foot of Denys, he calmy slotted the ball into the left-hand side of the net to make it 2-0. A note must go to Dwayne, Josh and Akram for their composure throughout both half’s, dictating the pace and dominating the game with precision passing, crosses and shots (well done to Dwayne for an excellent top-left bin shot – it should have gone in).

Merton 5’s were victorious, 2-0 against Parkonians 7’s and moved through into the third stage. A credit goes to the whole team and whilst MOM ended close with Neil (5 votes) and Lee (4 votes), many others names featured (Chris 3 votes). Good luck to Merton 5’s in their coming league and cup matches. 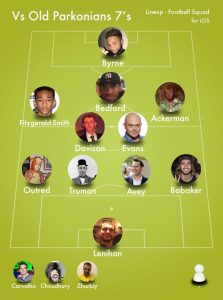