Good News. Peter is out of hospital. After a particularly nasty injury following an accidental clash with the Ibis Eagles keeper Peter has spent the week in hospital defying medical science but has been released today. Out for the rest of the season but is going to come and watch the 6s next home game. Never for the squemish and probably not wise but good to see him. 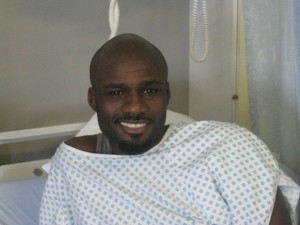