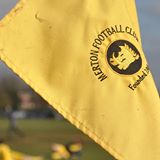 Only 3 games played this weekend, the 1s played Old Salesians at their new ground in Ewell beating the 3 – 2, two goals by Chisanga (one a left foot screamer) and Snooks.  The 2s played Carshalton at home beating them 3 – 0.  The 3s game got called off due to Southgate not having enough players.  The 4s and 5s didn’t have a game.  The 6s played Old Suttonians in the AFA Intermediate Novets Cup losing 2 – 1 with their winning goal in the last seconds of the final whistle.