This was a cracking performance in a cup competition where we have not enjoyed a great deal of success in the past. In the early days a first round bye was as good as it got. And a cup run was a long drive to Redhill to get thumped. But now this is almost a cup run as we had a bye in the first round and are now in the third round away to Warlingham. (Should that be Warbling ham – Ed). The game kicked of a little late in the depths of darkest dampest Surrey. Lingfield got into their stride very quickly and Sherbs had to be very alert to keep them out several times in first 10 minutes with good hands and good positioning.. The game took a bizarre twist on the quarter hour when their nippy forward chased an over hit through ball. Sherbs was gathering it in on the edge of the area so said Nippy forward gave up the chase and Liam Palmer in hot pursuit caught up with him well his heel and down he went. Straight red card. The general (Merton) view was that it was not the best decision. It was not a foul, it was not a goal scoring opportunity unless Sherbs was going to turn round and chuck it in and he did not even consult his lino. But we were down to 10 men and it was a game changing moment but not in the way most present anticipated. It took a few minutes to settle down and then, I don’t know why but Lingfield took their foot off the gas and took time on the ball to develop any moves. Our 10 men were spurred on by a sense of injustice and never looked to be outnumbered. Tills dropped into centre back where he was outstanding. Woody bossed and bullied in mid field but everyone upped their gameby the necessary percentage. It was no surprise when we went ahead with Jason Marsh latching on to a through ball and chipping it over their keeper. We nearly made it 2 nil when Jason crashed it against the post. Early in the second half a long goal kick was flicked on by Woody and Bosh took it on and put it past the keeper. It wasn’t until the last 10 when Lingfield showed the desire and urgency they had been missing and mounted some attacks but we held out. There was a nasty moment when they crashed a header against the bar. There was a shout for a penalty and their player took revenge with a hideous violent tackle which should have beena straight red card. The ref did not have a great game and he was being assessed. In my view he got the big decisions wrong but on the rest seemed up to it. I did not realise until the end of the game how difficult the tacky wet surface was to move the ball about. Lingfield have a nice set up even if it is a bit damp. It is a good bar, floodlights cups of tea and all that. But everyone of the Merton team and subs did really well and secured a memorable win. It was the lucky blue kit again with the famous socks that did the trick again. Back to an important league game at home on Saturday to BB Eagles. 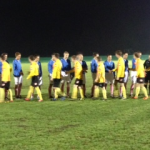 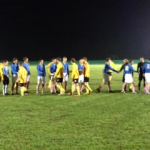 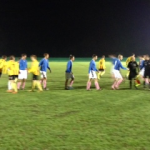 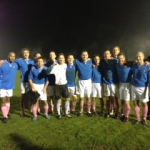