This was a hugely important win and 3pts for Merton in a relegation battle with Old Finchleans. The boys carried on from where they left off last Saturday. I don’t mean where they left off celebrating because that was Sunday morning 3am and they were in a shabby condition but where they left off playing. It was an impressive performance that secured an impressive 2-2 draw with Polytechnic . Both games were played on the very good 3G surface at Tooting and Mitcham’s ground. Seemingly in recognition of the importance of the fixture, Andy Copeland who is in charge of communications at the SAL came to witness and photograph the game aswell as the 3s game on an adjacent pitch for SAL’s Facebook. These were ideal playing conditions and after both teams settled down we started to take control and create chances but failed to convert them until Woody set up Dan Whiteman who finished well. (1-0, 25mins). Jason Marsh had a good shout for a penalty when he was the victim of some grappling but to no avail. But shortly after another Woody diagonal pass was volleyed spectacularly and unstoppably by Tom Rees into the net. Old Fs had shown little other than playing their centre Forward through but he scuffed his shot and Sherbs got a foot to it. 2-0 at HT). Clappers gave his usual rousing HT team talk but for the first 10 mins it was Old Finchleans who came into the game and with a bit of pressure created some opportunities but did not really threaten too much. Sherbs caught some crosses and tidied upm at the back. This proved to be a little bit of a swan song for the opposition because soon it was Merton back on top and creating good opportunities and missing them until Tom Rees latched onto a ball that had been flying round their area and buried to make it 3-0 (65 mins). We had a number of opportunities to increase the margin of victory, none better than when Woody brok clear and delayed enough to allow the centre half to flatten him from behind but Peter Koscoliek, ( the ref) who had an otherwise excellent game thought that was fair enough and perhaps it was. It was an excellent all round performance from Merton who now move significantly up the table. Clappers and Browner dominated in the heart of the defence and the midfield trio of John Lynch, Woody and Hoppy were excellent in midfield. Dan Whiteman and Tom Rees took their chances in great style. I suspect Old Fs had a few players missing but they still had some excellent players out there. Their Centre back, who made a run from deep and hit rasping shot from that flew narrowly over the bar (to the family’s great relief – but the boy had it covered) and centre mid both had excellent games but it just wasn’t enough. Merton were not to be denied driven on by Captain Clappers. There are some important battles still to be fought but we may have turned the corner and need to build on this. Well done lads. 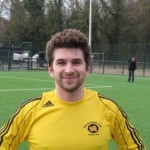 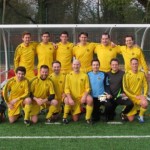