A really good team performance and a well deserved point on a difficult afternoon. With so many players missing (Holidays/Stag dos/Injuries) Clappers did well to get a team out at all and with no shows on the day it was the bare eleven. This is pretty disappointing and unacceptable at this level of football. The side had something of a makeshift appearance with players playing in unusual positions but it did not appear so when the action started. This was a good competitive match and we did more than hold our own. Everybody put in a big shift. We settled well and looked to move the ball around. We had the best of the early exchanges but we got snuffed out in the last third. We keep finding new ways to go behind and this week we conceded a penalty. The ref insisted that he had to blow his whistle before the penalty could be taken and being slow to do so caught the Alleyns guy out twice and was made to retake perfectly good penalties. But he held his nerve and scored three very good penalties but still only made it 1-0. We did not drop like last week and continued as before. Craig hit a magnificent volley from 30 yds when the ball broke to him after a corner but it cannoned back off the bar.  So it was a little unlucky 1-0 down at the break.  We battled away in the second half sticking to our plan and pressing for the equaliser.  Clappers hamstring went and he went up front and hobbled around organising our efforts and sledging their back four in equal amounts. Another foul as their defenders jumped over Woody and it was our penalty which Tee confidently slammed past their keeper. There was one heart stopping moment when they I thought we looked the more likely to score they struck the underside of the bar with a fierce shot and Angus did really well to save the follow up. We had our chances but could not score again although we pressed hard. This was a very competitive game and both sides had key players missing. Tee lead the the line magnificently for us holding the ball up and using it well. But all our lads were outstanding .  So another point but we need that elusive first win to get things moving. It is a very tight division. The ref and linos did very well as it was quite a physical encounter. Alleyns pitches were pretty good and their bar with balcony is an excellent facility. It is a bit hard to find though, specially when they close Turney Road, but it as a great place to visit and would have been even better if we had got three points. 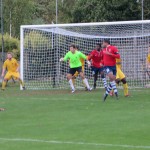 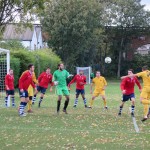 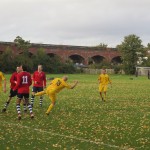 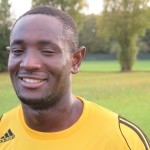 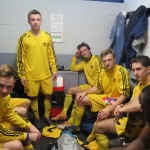 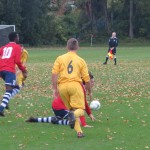 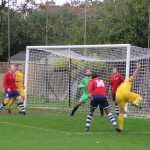 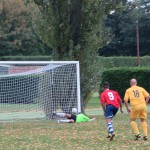 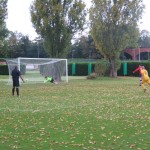 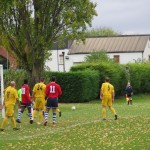 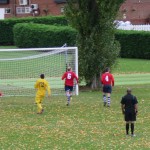