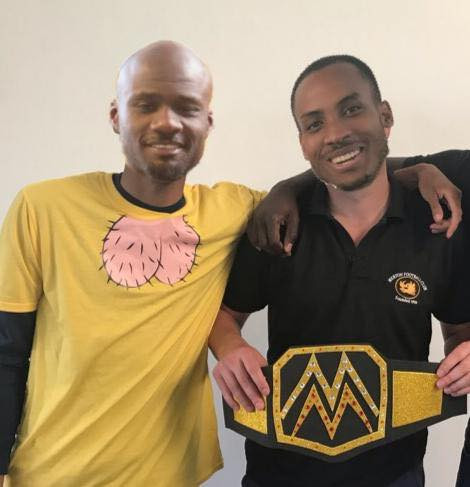 1s had a rather fruitless trip up North to Finchleans, going down 3-0. Their fearless leader was voted DOTD, while Max Carveth was the man of the day by virtue of being the least rubbish.

2s ground out an excellent 1-0 over Old Blues here at the Hood – Josh scoring in the 82nd minute. Woody put in a commanding performance for MOTM.

The 3s went down in another thriller 4-3; Vin voted MOTM, with one of the 4 Sams (Britney Speirs) being adjud…ged the DOTD. They were actually 4-0 down, but goals from Vin, Sam K and Aaron B pulled em back into it.

The 4s drew 1-1 – Dom Plumridge with the goal and Gubby with the MOTM award.

The 5s went down disappointingly 2-0 at home to Actonians. In a stunning turnaround, Dwayne went from DOTD to MOTM, while Pete was unfortunate to go the other way.

Pictured are these two, and also Haydn, who failed to say “EJ”. Do check out the videos which resulted from that transgression

Haydn volume 1 of his failure to EJ