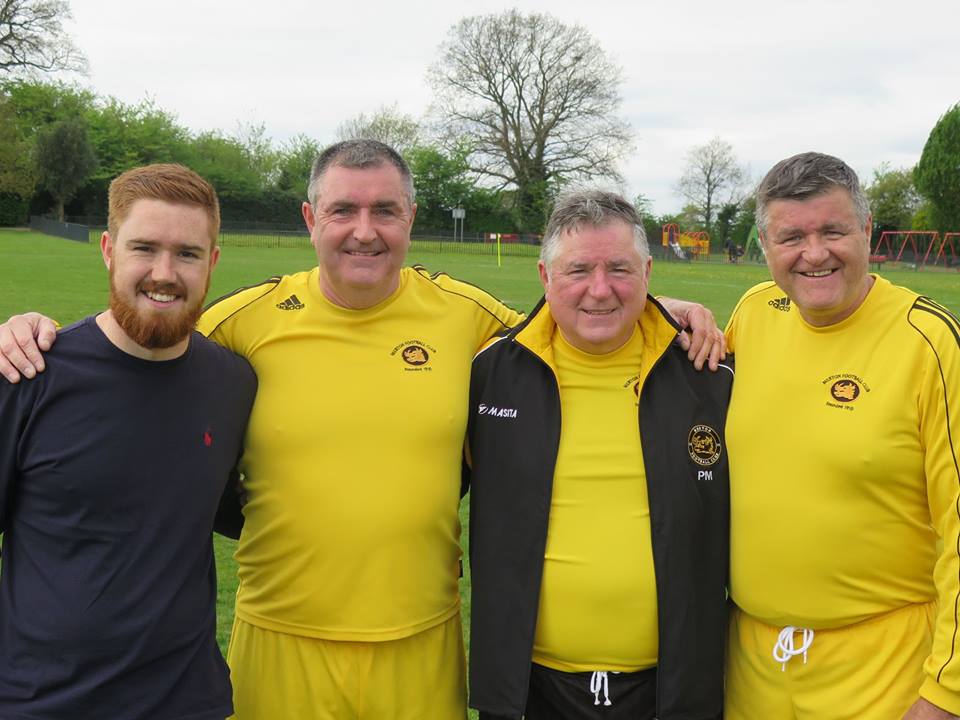 Good Friday isn’t renowned for generating a hive of activity, but sitting idle is not befitting of the Merton Way. As such, our annual Long Good Friday event rolled back into town, and with a full complement of football, mirth, agility and hot cross buns under relatively gloomy skies.

Kicking things off for the day was the Vets game against the venerable Old Westminster Citz; members of both teams impressively managing to assemble and commence the game by the alleged 11am KO time. As ever, it made for an entertaining game; Merton donning the Yellow, and with a good mix of old and older within their ranks. Welchy took the whistle for the first half and didn’t have too many decisions to make. Merton made a shaky start, and Westminster took a fairly early lead with a good finish. But the Yellows were very much in the game, with Ede and Pete O looking particularly threatening upfront; the latter seeing a near worldie slam against the crossbar from 35 yards. Westminster doubled their lead just before the break with another well-taken goal, and although the Yellows used their subs well in the second half and gave as good as they got until the very end, the visitors were deserving of their 2-0 win in what was a brilliant game played in predictably fine spirits.

Simultaneously on the pitch next door, the U13s played out a humdinger of a game against Raynes Park Vale, sadly squandering an early lead to eventually go down 3-2. Although once again, a lovely game of football on display, played in the right spirit by some very impressive young men. A testament once again to the great work Steve has done this year.

The 1pm games saw the U9s in action, who also played out a hugely entertaining contest with Carshalton Athletic, eventually going down 6-2. Both they and the U13s games underscored just how bright the future of the club is.

On the other pitch, a composite Merton ‘XI’ (more like 25) faced off against the Wimbledon Commoners for the first time; oppo arranged by our resident BBQ extraordinaire Darren Avey. It was great to see all Merton teams represented across the starting lineup, although that didn’t necessarily make for world-class cohesion and understanding. After being much the better side for the first 15 minutes, it was the Commoners who deservedly took the lead.

But after frantic substitutions abated from the Merton manager, the team began to settle into a decent rhythm and play some football. Darren was a rock in defence, Vanny was pulling the strings in midfield, and DQ was an ever-present threat (and astonishingly pacy) upfront. Kearnsy was also a menace down the left, although he did miss a clear-cut opportunity when one on one with the keeper by a rather astonishing distance.

It stayed 1-0 until the break, and the half time chat was more a case of herding cattle than tactical analysis or inspirational speeches. Nevertheless, having rung the changes, Merton once again seized the ascendancy and carved out numerous chances. Woody held the ball up with aplomb and delivered many a threatening ball which just couldn’t quite see the requisite finish applied. Other chances flew over the crossbar too until, eventually, the best opportunity of all came about as Merton were on the receiving end of a clear-cut foul in the box.

The pen was duly awarded, and up stepped, wait, who? Was that Luke Newman barging his way to the penalty spot? Indeed it was, and after the cameramen positioned themselves for the moment critique, he decisively slotted past the keeper to make it 1-1. Cue the celebrations.

Smelling blood, Merton threw bodies forward in a bid for victory. But, with minutes remaining, the sucker punch came at the other end. A goalmouth scramble saw Anam initially do well to block the shot on the line. However, his next touch was an unfortunate one, which nurdled the ball over the line. 2-1 to the Commoners, and that was how it stayed until the death knell of the final whistle. Once again though, a very enjoyable game – if lacking a bit of quality – against oppo who competed very much within the spirit of things, and who are welcome back any time.

It also quickly became abundantly clear how immaterial the results were afterwards, with the Hood atmosphere at its very best. Leading the way were Old Westminster Citz and some epic games of spoof. Fighting the Merton corner in the pub were none other than the legendary Murphys, who used all their experience to come away scot-free in many a game of Numbers, while ensuring everyone else ‘enjoyed’ more than their fair share of penalty port shots in the process.

The highlight had to be Fergus retaining his ‘title’ in some absurd game involving a spoon in mouth, and smashing Kieran on the head with it (see video). A brilliant solo effort on his part, with no help from outsiders whatsoever.

All in all, a fantastic occasion enjoyed by all, and huge thanks go to the various oppo for being a part of it, Steve and helpers at the bar, Jasper for producing some truly sublime food, Max for sorting the kits and everyone else for doing their bit. See you all at the Merton World Cup in a few weeks for more of the same – and better.