Hindsight is a wonderful thing, leading up to Saturday’s away game, players are dropping out left right and centre, the squad that is confirmed on the Tuesday, depletes each day, already losing the likes of Jacob to long term injury, Luke M moving onto pastures new, Josh, Dan, Niall being unavailable for selection, Billy pulling out on the Thursday with Tonsillitis, then Tom J drop out the Friday night and Andrew just a few hours before kick-off and Kieran, unfortunate not being able to shake of the hand injury picked up last week to go in goal.

Even with Ed & John G (of the 4s) jumping in to help out, we are fielding a much weakened side against a team who have yet to loose in the league. Even prior to kick-off, the previous night’s rain had yet to soak away and the ref was correct in calling the game off, however, against better judgement, we all chipped in to help with brooms and other ‘equipment’ to push the standing water to the edge. So, although a half hour late, we managed to get the game on. 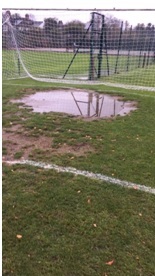 (If you look closely, you can see Ryan doing the back stroke)

Basically, it was an even contest for the 1st 10 minutes or so… after that, we had all the luck in the world… unfortunately, the bad kind!! It’s hard to pin point how or what went wrong, but all that matters, is it did, and in spectacular style…!

1st goal set the tone, a few lucky breaks for the oppo sees AOB7s cross behind the lines and side foot pass our stranded keeper, 2nd goal sees AOB7 capitalise on a pass which got stuck in a puddle, 3rd goal… much the same… as did the following up to the amount of 8.

In-between the onslaught, Daban manged to open his account after a cheeky through ball from the captain that even the oppo applauded, Daban strike sees the ball in to the top corner, for the second, good work from Ed down the left who puts a cross in for Ryan to collect, turn and fire low into the corner.

At the final whistle and totally outplayed by a good, but not the best team we’ve faced so far… we hope this is the lowest this team ever goes. We go again next week against Bank of England 5s who are in mix, but seem to have better results than our 7s (not hard though!), and  hopefully we get back a good few of the squad that was missing Saturday to push the 7s out of the rut they find themselves in.

To conclude (and pad this report out a bit!) we have a few comical moments to highlight the sort of day incurred, this also aids in the nominees for the Dick of the Day… Starting from the front and in no particular order …

Denzel- Came on second half and in fairness, done ok…

DOTD moment: Latches onto a great through ball and is clear on goal, but stops running to protest that he was not offside, only for the ref to inform him that his not blown up for any infringements and to carry on playing!! Giving AOB7s enough time to get back and dispose him of the ball! (An on a side note… throw in’s… not his strong point!)

Chris ‘Dodds’ – Started slow, got slower… almost needed resuscitating at half time, but still manged to come on for the last 10 or so in the second half…

DOTD moment – might be unfair, but needs to be mentioned… passed the ball forwarded, only to see it get stuck in a puddle, tries to somehow make amends which results in, not only Chris, but also Martin being wrong footed and sees the AOB7s forwarded stroll between the pair of them and slots the ball home!

Steve – We all know the joke about being ‘left back…’

DOTD moment – Passing across the goal to Martin and is marked by AOB7s striker, who steps across and takes the ball before Martin even reacts, and is now 8 yards out with the goalie stranded on his line, Goal!

Edward – we thank him for stepping up and helping out, really good to hear another voice trying to make a difference

DOTD moment – Well, apart from the school boy errors of losing the ability to take a throw in (was 3 or 4 times the ref blow up for a foul throw!!) or forgetting that you can’t remove the corner flag, to take a corner!!.. But the nominations was for the epic tackle that sees ‘Ed’ slide across the pitch, straight into the deepest puddle and emerging the other side with his top now see-through and clinging to the torso!! Some things can’t be unseen… !!!

But the winner goes to ….

John Gridley – Prior to the game, and realising the task ahead, he volunteers himself to go in goal. This is well received amongst the squad and is thanked by Martin who was to be elected keeper for the day.

DOTD moment – It’s understandable that after conceding 8 goals, you may be a tad upset, but at the final whistle, spitting the dummy and condoning your team mates to the opposition and declaring ‘it would have been 12 without me’ is one thing… but to then stomp off without even picking up his toys which was thrown all over the pitch after a very dramatic hissy fit, most unpleasant…

It took Ed a full half hour to calm him down in a locked changing room, we could the sobs thorugh the walls, of “please Ed, don’t make me ever play for the 7s again… I’m scarred for life and I’m only 102… take me back to the 4s…. PLEASE“ and fair play to Ed, apparently cradling johns head in his hands, promises him that he will never have to steep so low for the Merton cause again…Those pesky 7s will just have to make do next time!

MOTM – The opposition awarded the MOTM to the 7s captain, but this was declined, as a squad they all failed as a team and no one in this game deserves such accolade.

However…. The ‘Man Of The Moment’ award goes to Steve B, for his magnificent reply to a video clip issued by Civil Service 8s manager soon after the week be fore’s game…

Don’t worry, both videos will be issued on DVD format or available on download from ITunes for £99.99p, just in time for Christmas… Why not treat a loved one!!

PLEASE NOTE – The names in the above report have been changed to protect the innocent, the above is all ‘fiction’ and never took place, any person that may have had a similar experience, is merely coincidence and needs to up the dose of recreational drugs or get out more. It will be interesting to see how many people actual read these reports to the bitter end… Good luck next week ladies, going to need it!