Merton welcomed leaders HSBC to the Hood and had to settle for a point in a tight, hard fought encounter.

Lining up 433 once again, Merton started brightly with Ryan Gresty in particular breaking up play in the middle and initiating more than one counter attack. Ryan had almost played in both Dan (skied effort) and Tom (tackled) inside the first 10 minutes, clearly smarting at not being mentioned 8 times in last weeks match report. A man on a mission and a man in motion but unfortunately this (st elmo’s) fire led Ryan into a bone crunching tackle on the edge of the opposition box and a trip to hospital (via touchline, bar, and an earlsfield night club for initial tests – no break thankfully).

With Ryan off, Dave Scott came into central midfield as Merton continued to look for an opener in a tight game. A succession of set pieces failed to yield a clear chance; Browner’s panic-inducing nod-back from beyond the far post almost but not quite yielding a chance.

Then a good move down the left involving the excellent Alex Welch, Andy, Lofty and Rayner (with Ryan shouting approvingly from the sidelines) saw Lofty put a tempting cross in. Dan read the flight, ghosted between the two centre backs, jumped, met it with his forehead as the cross just cleared the head of the covering defender…and headed over. 2 DOTD votes ensued.

Tom was the next to have a chance, played in on the angle and striking a shot on the run from the edge of the area that the keeper beat away.

At the other end, a well organised Merton defence had restricted the visitors to only set pieces and the occasional scare on the counter, with Rayner doubling up as forward and wingback on occasion to deal with the dangerous oppo wide player and forward who were their main out ball.

0-0 at half time and Lofty urged us to push for the win, noting that this was unlikely to be a game with more than one goal. Ryan (just about still standing) agreed and urged Merton to get after them.

The second half was as tight and scrappy as the first. The best chance came early, and it fell to the visitors. Peter Brown missed a header for the first time in the game, and as the rest of the side gaped in disbelief, quick work from HSBC saw the ball squared for the oppo striker to sidefoot home from 10 yards. Sherbs, however, had other ideas and flung himself to his right, a strong hand keeping the ball out. The danger wasn’t over yet as the ball fell invitingly for HSBC, only for Cookie to bravely block the goal bound shot and then Browner to complete the clearance. A massive moment in the game.

At the other end, Merton were still probing away looking to get Tom in behind. Some nice interplay down the right between Alex King, Dave and Andy saw the ball squared for Tom to hit from the edge of the area, only for the shot to be blocked. Next, Dan screamed down the left wing and into the box, only for his cut back to be cleared.

DQ and Mike Stone came on to try and provide the moment of inspiration needed to win the game. Max in particular was convinced DQ would deliver, pronouncing it his time as Merton won a late series of free kicks. Alex King was also finding space down the right; initally to fire in a series of crosses that didn’t beat the first man, but then with increasing effect and culminating in a burst in the box and a dangerous centre that was hacked clear.

In the event, it was at the other end that the final piece of drama played out. A rare HSBC attack saw both Alex and then Cookie drawn out of position and beaten. As the attacker surged towards the box a recovering Cookie slid full length and made the tactical decision to end the attack taking man ball and half the pitch with him. HSBC were a little upset and demanded a red, but with covering players in the vicinity and the fact that Cookie tackled pitch man and ball in that order, a yellow was about right. Cookie took the booking very professionally and all seemed well until a HSBC player said something and Cookie crumbled, unleashing the west country rage and confronting said player.

Foreheads bumped. Oppo subs ran onto the pitch. Sherbs enquiry of “what do you think you’re doing?” (or similar) was met with a response that they thought someone was going to be punched. Maybe they were planning a dive in front of any punch like a secret service bodyguard, who knows.. It should also be pointed out that the hitherforeto unmentioned (in the second half) Ryan Gresty did not hobble on to the pitch to get involved. Professional.

In all event people were dragged away, it all calmed down and Cookie escaped a red. And then the free kick went wide. Escape complete.

Merton’s late rally failed to yield a clear chance and the game ended 0-0. Probably about fair in a tight game with few chances. 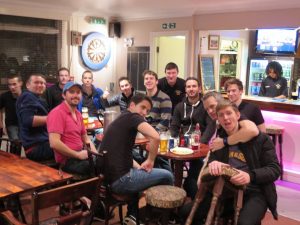 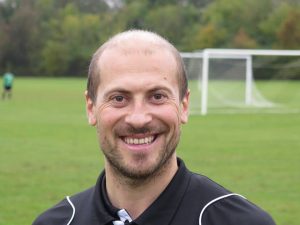 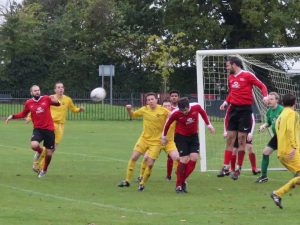 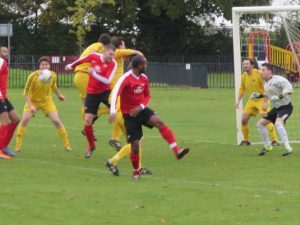 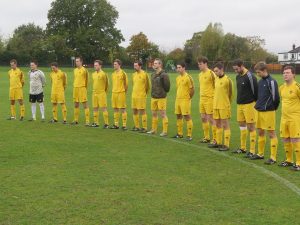