The concept of a game south of the river has become a foreign concept to the 5s as we travelled a short distance away to “uncharted” territories. “Uncharted” in this instance has a very ironic meaning, as we’ve been in Chiswick so much this season, that there have been rumours of Merton council looking to expand their boundaries across the river.

This week saw a different line-up from most weeks as we enter the festive season. Our reliant leader, Clive, filled in as a nostalgic left back while a rare partnering of Anam and Ackers in the centre of midfield. Up top we had familiar Pete who was making a return of sorts having previously played for Civil Service many moons ago, while Dulanje provided support behind. The game started rather poignantly with a moments silence was held due to the tragic news received in South America. The game kicked off and it seemed that a few Merton legs were less than receptive than usual, perhaps due to the cold weather as Civil looked to exploit our sluggish start. While they drove forward not many chances were created in the first 15 minutes. We began to become more involved in the game with good possession and build up play, but the initial sharpness in the attack was still rather blunt. Half an hour had been played when Merton looked to break on the counter from a corner. The ball fell to Dulanje on the left wing, with Clive bursting forward to his right looking to receive a pass to propel the momentum further. Unfortunately trying to take on a player instead saw the ball pinched from Dulanje’s toe, leaving a big hole behind which was exploited in numbers as Civil had yet to register the break meaning many players were still forward. Goal. One-up to the home team. Not the usual Merton start. A few more attempts were brilliantly dealt with, as the opposition’s centre forward proved a handful for our centre backs. Half Time.

A brief talk from our manager highlighted where we were going wrong and the boys came out looking to get back into the game. Down the left hand side Dwayne superbly provided cover as the Chiswick team looked to bombard with pace. 10 minutes into the second half, we brought on Noor for Darren Avey, as Clive stepped into central defence, Dwayne filled in at left back and the fresh legs playing in front. This seemed to tighten the back line, as it allowed Dwayne to provide more pace on the flank, while Clive could organise positions. A Civil attack saw Clive slide in strongly to stop the ball and play forward to Anam who then brilliantly saw space down the right flank for Dulanje. Our ever present attacker broke down the wing and played a ball across goal to Noor, who laid the ball for Aaron B to shoot. Deflection! The ball bobbled past the keeper looking to go clear, when Pete charged in at the back post and slotted home. 1-1. The home team looked around and collected themselves as they looked to get back into the game. This half however Merton had stepped up to play at their usual standard. More chances were made both ends, but the next goal came rather controversially. The home team looked to break down our right flank and whipped a ball in which was easily caught by Sam. As the ball was caught, our ‘keeper was bundled by an oncoming runner (who could not stop in fairness, momentum taking over). The ball was dropped and the ball rolled in. Normally play would be stopped and a foul would be given – not today. Without looking to condemn the referee, this was against the improvements we imposed during the half, with the match official later admitting he made the wrong decision. A few cries of encouragement saw Merton come back, not looking disheartened as the team of last season would have been. The away team pushed and pushed looking to pull back another equaliser, with Pete coming very close with a 1 on 1 which the on-rushing keeper brilliantly saved. It looked like despite our efforts, the goal was not going to come. Anams passing continued to be a threat with Aaron B making many dangerous runs creating space. Last 2 minutes of the game and the equaliser had still not come. The ball fell to Pete on the far edge of the right hand side of the box, he beat a player, looked up to set the ball and placed it across goal into the net. Back in the game, but not enough time for the winner.

MOM: Pete for his two goals which very well could have been a hatrick! Anam and Dwayne weren’t too far behind but I think the importance of Pete’s goals proved he just scraped ahead. 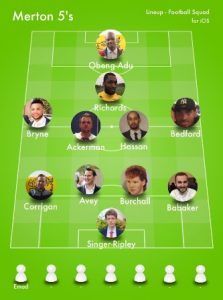