A group of discombobulated, confused, lost men in a field. No, this was not the result of a 5s night out – it was in fact us at the very start of the game. A double booking on the pitch we thought we had booked left us aghast, in the middle of Wimbledon Common Extensions, not knowing where to turn. Thank the lord for Darren using his initiative; otherwise we may still be there right now.

And we started the game as we prepared for it. They were on the front foot and causing us all sorts of problems in the first 15 – 20 minutes. They created some decent chances forcing us into some last ditch tackles and blocks. A looping, well-placed header seemed destined to find the far corner, however Chris on the line anticipated it and backed up to nod the ball off the line. Kieran made a smart save from a 1 – on – 1, and shortly after was forced to dive from behind their striker, over his knee, to claw the ball away to prevent a certain goal. They did eventually make the breakthrough, however the goal came in unfortunate circumstances for us. With Phil clear favourite to win the ball, their centre forward ploughed through the back of him for what was a certain foul. Despite most players on the pitch [including theirs] stopping, their striker played on and slotted the ball in the near corner. The whistle was not forthcoming and they took the lead.

As the half progressed, we worked our way into it and it is fair to say that we dominated possession, playing good football in our approach play and stringing some passes together. Like Theo Walcott in his 12 years in Arsenal though, we promised a lot but just did not quite break through.

The second half started a bit more open than the first. We maintained the intensity of our passing and were starting to find some spaces in behind. We managed to force a corner and Aaron Byrne met it well, diverting his header narrowly wide having beaten the keeper. At the other end, Kieran saved another attempted chip with their player 1 on 1. In a moment of quality, they played an inch perfect ball through to their striker who rounded Kieran. With the goal gaping, Darren flew out from nowhere to block the shot and save a certain goal. However, the second goal did eventually come. It was from a corner, and the ball seemed to stick to their player at the front post. He managed to get a touch in a crowded area and poked the ball past Kieran to make it 2-0.

In times gone by, we would have got on each other’s backs and collapsed in that situation, however we were dominating possession and all had the belief that we could come back into this game. It got to around the 80th minute when we struck. It was a lovely, crisp, passing move which resulted in a good shot by Aaron being well saved. Fortunately, Gibbo was on hand at the back post to nod into the empty net, and the comeback was on.

A few minutes later, we drew level. A bit of a pinball in the middle led to the ball getting played out to Neeko at the edge of the box. He took a touch inside and, from what looked like quite an acute angle, curled the ball into the far corner giving their keeper no chance. 2-2.

In the ascendency, we felt we could get a winner in what little remained of the game and complete what would have been a fantastic turnaround. Lo and behold, from what seemed a fairly harmless position, Dwayne picked the ball up on the left and sent a searching ball in. Good movement saw Aaron Byrne at the far post completely unmarked, and he tapped in to complete the fine comeback to snatch the game and win it 3-2.

This performance was not vintage 5s by any stretch. In terms of chances over the course of the game, it could very easily have gone the other way. It is also true that the oppo had some decent players, especially at the back. But where we won it went further than just the possession we maintained for most of the game [barring the first 70 minutes], it was that we played better as a team, did not get frustrated that things were not going our way and maintained our belief that we could get back in the game. This was particularly spiriting to see and although we will need to play better in our quarter final next week, we certainly showed the togetherness that we will also need to pull of what would be an upset.

We didn’t get our strike force of Gibbo and Aaron involved in the game quite as much as we should have, but their movement was good throughout and they got two very important goals for us again today. The midfield of Ackers, Neeko, Dwayne and Josh dominated the midfield and our defence held strong with good saves from Kieran and goalline clearances from Chris, Phil and Darren. It’s a good win and we can take some confidence out of the game into the next one. Man of the match was shared by 4 people – Kieran, aaron, Dwayne and josh – and many more could have been added to that list. 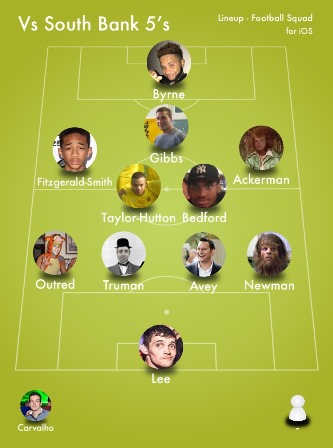