MERTON FC 5
HSBC 4
Starting line-up was as follows: Merton’s number 1, Swanny in goal, back 4 of Kev, Chappell, Beans and new boy Reece. The three midfielders were Ty, Lee and Tony and the three strikers were Nick, George B and Callum. Impact subs were George H and Andy.
At last – the new 2017-18 SAL season had begun for the mighty Merton 6’s. After integrating 5 new players to the match day squad, it was going to be a challenge to see how the team bonded after a successful last season!
Usual pre-match antics resumed with players running late (George B) and another going to the wrong ground (Andy – who claims he was not hungover!!). Anyway to the game, let’s just say Merton forgot their shooting boots and created enough chances to have won the game inside the first 20 minutes. Nick got us off to a flier by racing through one on one after a great through ball (hoof) by Chappell and scoring. 1-0 to Merton.
As mentioned previously Merton missed some great chances to extend their lead, however with HSBC’s first attack, their striker got in behind and seemingly going nowhere was brought down by Tony. Ref gave a penalty and it was dispatched. 1 – 1.
Merton were then asking questions about themselves after such a bright start, but kept attacking and finally scored again with Callum nicking the ball off their right back, cutting in and dispatching a shot passed the keeper. 2-1 to Merton and surely we would go on now, how wrong we were! Beans was having a good game at right back but his ankle finally gave way after making two or three lunging tackles and on came Andy. After a long hopeful ball held up in the pitch it dropped nicely for their striker who nicked the ball round Swanny and was brought down by Andy – another penalty and again was dispatched. 2 – 2. It was unfortunate for Andy, as I don’t think the ref would have given it, but Andy’s guilty expression probably swayed him!
Half time came and the lads were disappointed to be drawing considering we had numerous good chances, including two open goal misses (sorry George and Nick!).
Second half started and with HSBC beginning to tire, Merton began to make the pressure count. First Nick got on the scoresheet again with another one on one finish and then Tyron netted after good work from George. The shot was via a deflection and should have been an own goal in my eyes! Then Tony, also on debut netted with a cool finish!
Things were looking good in the Merton garden until a late flurry from HSBC got them back in the game! 2 quick fire goals gave the scoreline a rather flattering 5-4 outcome and with a late chance spurned by HSBC things could have been worse. The game finished with a victory for Merton and although the scoreline suggested it was a close match we should have won by more. The positives were that we were creating chances at will and the new lads all provided good performances.
Special mention to the HSBC lads who played the game in a good, but competitive sprit and it was great to see them not give in and keep going until the end, even with 12 players and no regular goalkeeper.
Unfortunately there is no game next week for the sixes and as the gaffer will be away for the next two games the organising will fall to others to deal!
Man of the Match: To be fair this was a difficult decision as everyone had a good game. After counting the votes Tony, Lee, Ty and Callum got nominations but this week it goes to George B, who despite missing a sitter created chances and never stopped running!
Dick of the Day: Again a difficult decision – votes were received for Gaffer (who’s half time team talk didn’t go down well with Beans), George B (for missing an open goal and attempting a diving header which came off his back), Ty (for smacking his head on the tap in the showers and Andy (for turning up at the wrong ground and giving away a penalty in first touch as a Merton player!). Unanimous decision this week though was for a player on competitive debut – step up Nick! (this was for missing enough chances to have won the golden boot in his first appearance)
Written by the Gaffer 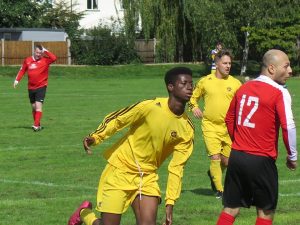 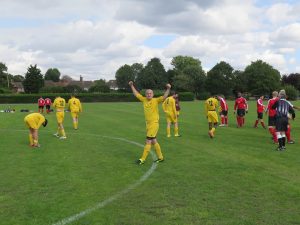 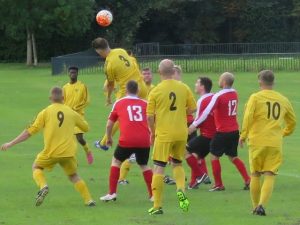 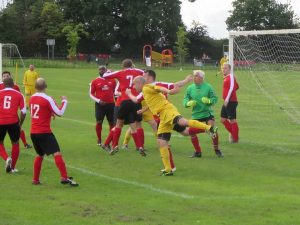