Under 13s vs Worpledon Rangers

Today Merton FC played Worplesdon Rangers warriors in a action packed match.before the game started there was a minute silence for a Merton adults player who had sadly died in a traffic accident. 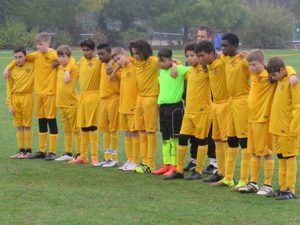 The match kicks off .

Lots of runs and plays are happening at both ends of the field. Then worplesdon rangers get a free kick on the half way line and there taker smacks it forward and it bounces over the keeper. 1-0 to  Worplesdon rangers. Later on the other team gets a corner it comes curling in and one of the Merton defenders headers it into his own net. 2- 0 to Worplesdon rangers . Although Merton were 2- 0 they still had fight in them but Worplesdon went on the attack again and scored making it 3-0 after only 15mins, not a good start.

Later on Marcus got the ball and ran Through the defender and made it 3-1.
Straight after Marcus received the ball and ran with it and he couldn’t be stopped then he shot and it went in 3-2 to the opposition, the come back was on. After attacks at both ends of the pitch and saves from both keepers . Merton did a few passes then got the ball out to Marcus and then he put the ball in the box to Theo who then smaked a left footed volley straight into the bottom right hand corner. Everyone cheered and was impressed of what a good goal it was. 3-3

Half time Steve gives the boys a talk and tells them what they need to do.

2nd half Kicks off .

Lots of chances happen at both ends both defences had there work cut out for them.
The Thier keeper takes a goal kick and it falls to Evan who smacks it straight over the keeper it was a excellent goal. Later on the opposition looked like they were going to equalise but then the linesman  said offside as the striker put the ball into the net.

4-3 to Merton the teams shake hands and say well played to each other.

Everyone worked hard in that match but the man of the match was Marcus.