We returned back at The Hood this week for a 10.30 kick off against Hampton and Richmond Stags.  Following last week’s win another before the half term break would be nice.  Excitement was in the air as we received the message in the week that the new yellow kit was ready for the boys to wear and debuting on home soil.  We were told to turn up early so the boys could change into it, all boys were there ready, even Faris.  They changed on the side line and before it got dirty, posed in the goal for the team photo.  The second message of the week received late Saturday from Roy, the referee had cried off due to injury and was looking for a willing volunteer; well let’s just say Roy really knows how to silence a bunch of parents.  No joy with a volunteer or replacement ref on the day, so Roy stepped up and took the whistle.

Starting line up this week was Max in goal, Ollie and Archie in defence, midfield of Lewis, Louis and Percy and Harry up top. On the bench were Joe, Faris and returning from his holiday, David. With the boys looking smart in their new kit we started were we left off having majority of the possession in the first 10-15 minutes but again just couldn’t find the net. You could see that the training Tuesday nights were paying off as the boys were now playing as a team, talking and passing to each other.  It fell to a defensive error, which lead to the oppo who hadn’t really threatened our half scoring the first goal, slotting the ball into the near post. We kicked off and continued to press the oppo.  Three changes half way through first half, Archie, Ollie and Louis off for Faris, Joe and David.  We equalised with a peach of a shot and goal from Lewis, left foot looping over the stretching keeper.  1 – 1 and back in the game.  That’s how it stayed until the half time whistle.  It was looking like one of those games where we had most of the possession but not finding the goal.

Couple of changes made and the second half began, the oppo also making some changes which made them slightly stronger.  Confusion is only what I can put it down to what should have been our second goal.  What looked like a handball by the oppo and then the ball scrambling over the line?  The shouts of hand ball and confirmation from the oppo manager lead to the stand in ref giving Merton a penalty.  Up stood Percy, unfortunately his shot was saved by their keeper. What I would say is that their goals were mostly due to defensive errors and not clearing the ball quick enough.  Including one that could well have done with goal line technology. We did manage to get two more goals but it wasn’t enough to level the match.  Faris scoring bottom left near post from an assist from Archie and Percy slotting the ball bottom right corner of the goal. I do believe that this is a game we should have won, given that we had most of the possession and best chances.  The boys are definitely improving game by game and were unlucky in this match.

MOM went to Percy who has shown consistency over the last couple of matches and managed to get on the score sheet as well, well deserved.

Observations this week: Stuart had a run in at Percy’s Saturday game with a sunglasses wearing man (Terminator) who didn’t like the decibels being shouted from the sideline or Stuart’s jokes to lighten the situation!! and Roy’s watch doesn’t do Fergie time.

No game next week due to the international break (half term).  Potential friendly on 29th against Wongas at 11.00 where there is a Merton club day for the youth section. 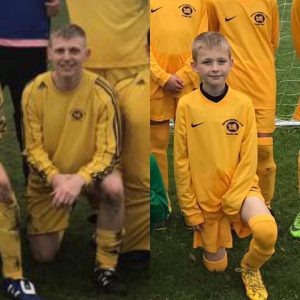 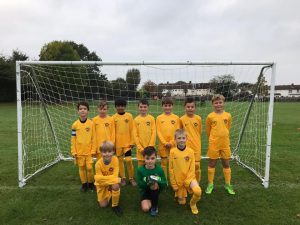