This week saw the under 9s play away against Kingstonian under 9s in the second game of the mini festival. A pre match weather warning message was received the night before from the coach, telling parents and boys to wrap up warm for the match. Arriving at the pitch, there was a chill in the air, but conditions were perfect for a game of football.  The boys arrived on time for the warm up; absence of Coach Neal who had the task of picking up David, he had the address on his phone which ran out of battery.  After finding David’s location, he finally arrived to take over the warm up from Roy.  Roy looked pretty warmed up himself fishing the balls out from the ditch behind the goal.

The facilities at Kingstonian’s ground were nice, hot drinks available and pitch close to the patio area. This meant no sinking in the mud whilst watching, the shoes stayed clean and feet not as cold this week.

Referee who had a good game started the match promptly. This week the formation was to be 1 in defence and overload the midfield/forwards.  The starting line up was Max (GK), Ollie (defence), Joe, Louis, Percy (midfield), Lewis and Faris (Forwards).  Subs this week were Archie, Harry and David. This formation worked well throughout the game.  Both teams started well creating numerous of chances.  1st goal came from a mistake from their defender and goalkeeper. This led to Faris pouncing on their mistake and putting the ball into the net.  We continued to create chances, until they broke through and scored making it 1 – 1.  The boys not looking downhearted kicked off and this is where they absolutely played the best football they have played this season.  Changes made, David, Harry and Archie on.  David picked the ball up just inside their half and hit a thunder strike at the goal, it was on target but a superb save by the keeper denied David his first goal for Merton.  The save was parried out by the keeper which fell to Faris’s feet who placed the ball into the net. 2 – 1 and that’s how the half finished.

The second half, wow total football is all I can describe it as. It had everything in it; great passing, good link up play, hard tackling, one touch passing, great defending and a wonder save from Max.  The opposition didn’t really put any pressure on Max in goal, who, apart from a one on one situation and pulling off the save of the season had a quiet second half.  This could have been for the great defending from Harry (Tony Adams) in defence.  He was solid all game including a great tackle near the end to deny them from scoring another one on one goal.

Now for our 3 goals, first one was by Archie.  After what looked like a two footed challenge by Archie, not according to the ref, somehow got back to his feet and managed to place the ball beyond the scrambling keeper.  3 – 1 and now a bit more comfortable. Second goal came from an Ollie free kick, who crossed the ball into the box.  The ball bounced through to Louis at the back post to put the ball into the net.  Our third came from a through ball by Archie to an on running Ollie through on goal who placed the ball beyond the keeper.  5 – 1 and well deserved.

All the boys played their hearts in this game, everyone was buzzing from this result. It was good to see the progress they have made from the start of the season.  Observation made is that it seems every time Roy’s daughter, Lauren doesn’t show for a game the boys win, just saying. 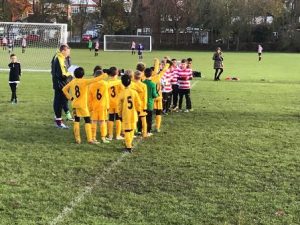 Moments off the pitch – Lewis managing to break the MOM trophy before the game. Luckily later that day Roy found a replacement. 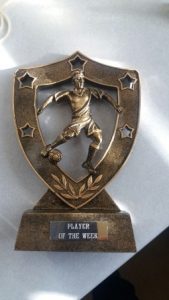 The fumes of alcohol coming from Stewart and telling us that Percy is never drinking if that is what he will smell like after a session.  One way of keeping kids off of alcohol I suppose.  Taff preparing himself for an afternoon with Paddington and showing us his new Doc Martins!! 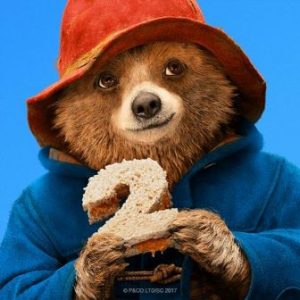 Spectator Bobby, warming up with the team and smacking Joe in the crown jewels with the ball. The corner we took, not realising that one of their players was still scrambling out of the ditch after getting the ball.

Last game next week of the festival fixtures at home to Croygas.  A local derby and rival match against some of the boys former team mates. Play like they did today and we will smash ‘em