By no means a classic worthy of comparison with Henman v Ivanisevic at Wimbledon, but Merton 2s – settling
for a home draw with Norsemen – can at least point to a rain (storm) break five minutes from the end
that turned the tide just as effectively as it did in that fateful SW19 match-up.
Mario Del ‘Trotter’ Prestito’s appetite in the final third piled the pressure on early doors. Josh Fitzgerald-
Smith, as tall as two players (and with the name of at least three), marked his 2s debut by latching on to
an Ally Shields flick to slot home the opener. Just minutes later, the very idea of Chris Rayner bearing down
on the defence was enough for Norsemen to deflect the ball into their own net for 2-0.
The visitors bagged one before half-time. They also forced a flying, textbook – neigh, picturebook – save
from Sherbs in goal. They would continue to have the best of it in the second half.
That was despite the obvious quality of Lewis Ackerman, who put in a man-of-the-match-performance in
midfield and spent much of Wednesday evening at training feebly, but not unenjoyably, answering Clappers’
questions about why he was trying to hide in the 6s. Gabby ran him close with his constant foraging
down the flank from right-back.
Ackers and Gabby combined could do little about Norsemen’s equaliser, however – a deflected shot that
looped over Sherbs’ best efforts. By that stage, though, Norsemen were banging on the door almost as hard
as the rain.
One damp squib worth mentioning, unrelated to the result: we’re sure the referee’s assessor will have some
interesting things to say to the man in black about elbows and dangerous play. Still, a good point to start
the season. Far from a wash-out.
Squad: Alex Herbert (GK), Mike Reed, Dan Rist, Paul Pearce, Gabriel Draghici, Luke Mora, Graham Willgoss,
Josh Fitzgerald-Smith, Chris Rayner, Lewis Ackerman, Mario Del Prestito, Ally Shields 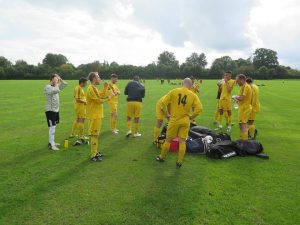