Well the biggest game of the season thus far was upon us and it was the small matter of an AFA cup final spot up for grabs.

Manager Smithy managed to convince the boys it was a 13:30 kick off (when it was 14:00), and everyone made their way to the venue on time. Well when I say everyone, George got lost at Morden and the boys had to get off the tube at the next stop to wait for him.

We had a strong line up and a massive thanks goes to Spense for agreeing to miss out.

We welcomed back Lee after his long term injury, which was great news for the sixes as he has been missed in certain games.

The team talk in the changing rooms prior was making sure everyone was focused and knew their roles. After a bit of music we made our way to one of the back pitches for the game. It was a welcome sight seeing a ref and two linesman making there away across the field, as this is something we were not used too!

One last team talk and then the game started at a frantic pace.

Initially Merton were on the back foot, but we were looking very dangerous on the break.  Disaster did strike in the 5th minute with Grant giving away a clumsy penalty.  Word of advice Granty boy, when appealing its outside the box, make sure you are standing outside of the box first!  They scored and we were thinking this may not be our day.  This did give us the wakeup call needed, and as the saying goes, the scoring team are at the most vulnerable after scoring and within minutes Tony scored with a cool finish. 1-1!!  The game then settled down, but didn’t lack the challenges and passion of a semi final.  Moments before half time disaster struck.  Merton failing to clear a corner, after numerous chances to do so and with Kev ball watching left their player to score with a good finish in the corner.  2-1 down at half time.

Half time team talk consisted of us trying to play our normal game as the result will take care of itself, as the sun and hill would come into play second half and it was to our advantage.

Second half began well for the mighty boars and we started to create chance after chance.  The skipper had a goal bound header spectacularly cleared off the line and the resulting ball back found Nick after a flapping attempt from their keeper who slotted home.  2-2

The lads started to tire and a few changes were made with Matt coming on for the skipper and moving in to right back.  Chance after chance went begging for Merton, so it was no surprise that we scored soon.

The self proclaimed Big Dog scored a third (can’t remember how this came about) to queue wild celebrations from the lads.

After we went ahead, Norsemen changed their formation and came back in the game, however this left them horribly exposed at the back.  We missed numerous good chances as Tony and George missed 1on1’s to good saves from the unorthodox keeper.

With all these chances missed, the inevitable happened.  Hitting us on the break, Norsemen equalised making it 3-3. The heads went down slightly and were out on our feet.  Smithy came back on and managed to get booked for a minor scuffle as one of their lads couldn’t take a strong challenge!

Extra time came and Swanny was the busier of the two keepers, pulling off a couple of blinders.  I was fearing the worst and was also worried about the players dropping like flies.  This is where all the younger years of playing Champ manager came into its own, making changes and tinkering every couple of minutes!

With penalties looming, Merton created one last chance to which Tony, who was limping in pain, managed to squeeze a shot past the keeper. 4-3 to Merton and another hat-trick for Tony!

In the celebrations it was clear Tony couldn’t continue, on came the skipper to make a back 5 to protect what we had.  The pressure to hold on was immense and everyone put their bodies on the line.  With minutes to go Matt spotted an opportunity to finish the game and was clean though only to sky the chance – we were thinking the worse!!

Luckily the referee blew for full time and a great match came to end.  Merton celebrated like mental and Norsemen were gracious in defeat and wished us well for the final.  Even poor Tony shed a tear at the end, but think that was cramp!

So there we go, the lads move onto to the AFA cup final on the 24th March 2018 at EBOG and I hope we can get a decent travelling support coming from the Hood.  On a personal note it was great to manage the lads on the day and everyone gave 110%.   Nothing is won yet, but we have a great chance for a historic double!

The celebrations lasted long into the night and I gave up at 01:00, whilst  a few hardy souls carried on!

Man of the Match: No votes taken as everyone was superb.

Dick of the Day: no votes again

Next week away to City of London

Written by the Gaffer 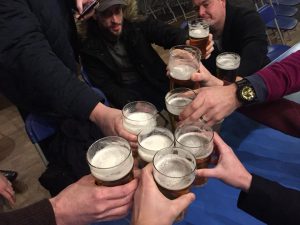 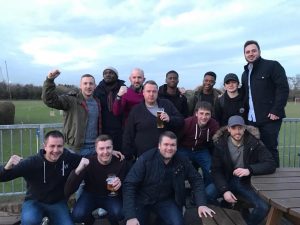