Epsom Town Yth 1 vs 3 Merton FC
First half, started off ok. Our midlfield was a bit sloppy, we nearly scored a couple of goals and had more possession, Alfie skimmed the post. They liked pushing down the rightwings and we gave away couple of fouls and a penalty that was nearly saved by Milo, who got a touch on the ball, but it bounced of his fingertips and hit the top of the net. We also gave away a few set pieces due to the awkward pitch conditions, it was muddy! Evan, who’d come on for Kieran, scored the first goal for Merton, from left side & left foot straight into the bottom right corner just before half time.
Second half, we used all our subs, Alfie came off for Freddie in right back, Kieran came back on for Hugo and I came on for Theo and Steve put Evan in central attacking midfield and me on the right wing. We had more possession of the ball and more shots at goal. As I came on, one of the opposition fouled me in the back which gave us a free kick that Nikoy took, but the score stayed at 1-1. I made a few runs down the wing, got past 3 players, leading to a corner, where we just missed another goal. They got to our defence, we passed the ball away, which led to Marcus having a bit of a run and a cheeky one-two with Kieran, Marcus crossed it in, it was a low ball for Justin who tucked it away in the bottom left corner. 2-1 to Merton! We’d started getting under their skin and they started getting angry. Towards the end of the match, Marcus brought the score to 3-1, by having a shot that bounced just over the goalies hands and into the bottom right corner! I tried making another run, got the ball round the player but got studded in the ankle so came off injured. Hugo came back on, we started taking our time. It got to the end of the match, the whistle blew, we started cheering, we lined up, gave them 3 cheers and one for luck, they did the same and we all shook hands.
Overall, we had more possession, more shots, we were the better team and that showed in the end result. We’re now 2nd place in the League, with a match in hand, we must carry on playing as well as we did today and improve where we can in training and…keep winning matches!! 🙂
Match Report: Isaac Tossio (winger/striker) 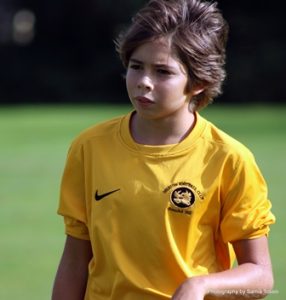